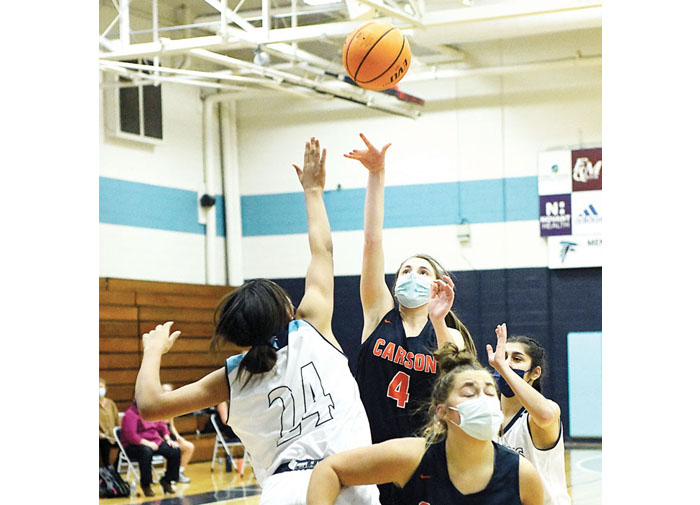 CHINA GROVE — Nothing in basketball is more valuable than a guard who doesn’t turn it over, and senior Ellie Wilhelm committed seven turnovers in Carson’s first 14 games.

That’s half a turnover per game in a world where basketballs are heaved off the wall and into the bleachers with frightening frequency by Carson’s opponents.

“I think the key to low turnovers is just staying calm,” Wilhelm said. “Keep a good pace. Get the ball to your teammates.”

Wilhelm is remindful in some ways of her coach, Brooke Misenheimer Stouder, although Stouder was a pure point guard in her playing days at East Rowan, while Wilhelm is a combo guard.

“That’s a good role for me,” Wilhelm said. “I like playing the point, but it’s a lot easier to shoot when I’m not.”

When all the Cougars are healthy, Wilhelm starts the game at point guard. When sixth person Lani Isley (4.5 assists per game) comes in to tackle the bulk of the ball-handling responsibilities, Wilhelm moves off the ball and looks for her shot.

Not many girls shoot it better. She’s right at 50% for the season on field goals and she’s a downright deadly 44% from 3. That produces the same amount of points as shooting 66% on 2s.

“That’s the difference between Ellie and me when I played,” Stouder said. “Ellie is better. She’s so smooth. She’s always looking to deliver the ball to her teammates, but she can score a lot more easily than I ever did.”

“She’s very good at taking whatever the defense is giving her,” Stouder said. “She moves easily between the 1 and the 2. She can score at all three levels. She rebounds. She defends. She’s just a really good basketball player.”

Wilhelm, like so many of the county’s athletic senior class, was part of the crew that won the 2015 Little League World Series in softball. She still plays softball for the Cougars, but basketball is where her heart always has been.

“I started playing basketball at 5,” Wilhelm said. “I’ve always liked basketball a little bit better. I’ve always been that girl who goes home from practice to shoot some more in the driveway.”

Her third-favorite sport is fishing, an activity she undertakes with her brothers. She has a twin, Ethan, who plays on Carson’s football team.

Wilhelm did not have huge expectations prior to her freshman season at Carson. The Cougars had eight returning varsity players, a couple of girls moving up from the jayvees and several incoming freshmen from the powerhouse Erwin squad that had smacked Wilhelm’s Southeast team in the middle school tournament finals.

“I was kind of surprised to make varsity,” Wilhelm said. “But then I started the second game.”

A high percentage of her points have really mattered. She scores when Carson needs her to score.

“We really struggled to score in both games with Statesville this year,” Stouder said. “In both of those games, it was Ellie that got us going.”
Wilhelm scored 41 points in those two games.

“She does whatever we need her to do, moment by moment,” Stouder said. “Always been at her best in the biggest ones.”

Carson is 36-4 in the North Piedmont Conference in Wilhelm’s four seasons, with three outright regular-season titles, one co-championship, plus three conference tournament championships.

She’s been excellent in Christmas tournaments. Carson won Christmas championships at Catawba in 2017 and 2018 and was runner-up to West Rowan in the 2019 tournament.

“That’s what I missed the most this year, not having the Christmas tournament,” Wilhelm said. “Those were the most exciting games I’ve ever played in.”

“Those were thing we all gradually got used to,” Wilhelm said. “The biggest adjustment for me was not having fans. Your energy usually comes from the fans. But this year most of our energy came from our bench. They kept everyone up.”

Wilhelm is 5-foot-6, but she does enough things well that she’s a small-college prospect.

She hasn’t decided yet whether she wants to play college basketball or wants to continue her education as a normal student.

Whatever happens in the future, Carson is happy to have her for tonight”s game — and possibly, for one more.

“She’s someone you can trust to make good decisions,” Stouder said. “She’s been a vocal captain this year because we needed that from her. Her growth as a leader has been cool to see.”

With 6-footer Mary Spry injured in the first minute on Thursday and on crutches Saturday, Carson is almost certain to be playing small again tonight, with the two Isley sisters (Lani and Hannah), the Perry cousins (Carleigh and Colbie) and Wilhelm logging most of the minutes. But that’s a lineup that has played together a lot and has won two challenging playoff games.

Hickory will be playing at Carson at 7 p.m. This is the regional final. The winner will play for the state championship on Saturday. Northwood and Asheboro are the teams left on the eastern side of the bracket.

Hickory (11-2) lost to Alexander Central and Freedom during the season, but Hickory beat Freedom in the third round of the playoffs. Finley Lefevers, a 6-foot senior, is the big scorer for Hickory. She signed with Queens.