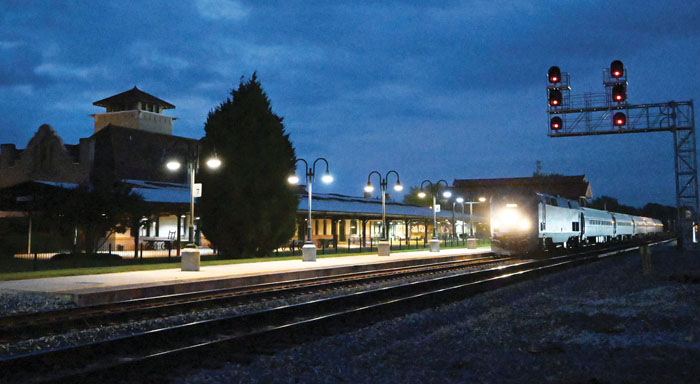 SALISBURY — Construction for a second platform at the Salisbury Station on Depot Street is expected to begin next year.

Local leaders hail the project as one that will improve safety while implementing innovate infrastructure consistent with the historical character of the train station. The Salisbury Station, which contains an Amtrak station, is located at 215 Depot St. and is served by three passenger trains: the Crescent, the Carolinian and the Piedmont.

Salisbury City Council members on Feb. 16 approved an agreement with the North Carolina Department of Transportation for a project that would add a platform on the east side of the railroad tracks with access via a proposed underground tunnel. The project totals $19.75 million, with NCDOT covering most of the funds via its State Transportation Improvement Program. The city is responsible for $780,000 of the total cost, which will be billed upon completion.

Completion is estimated for 2024.

The improvements also will allow the expansion of both freight and passenger services at the Salisbury Station along the rail corridor between mileposts 333.1 and 333.9. The NCDOT is currently working with the Historic Salisbury Foundation, which owns the more than 100-year-old station, on the design, according to the city’s engineering department. The station is currently within the Salisbury Railroad Corridor Historic District.

The project also includes a right-of-way acquisition, which will cost $1.64 million and is included in the total cost of the project.

The project is currently listed on the city’s list of Capital Improvement Projects for future funding, and it’s anticipated that the $780,000 will not be needed until the 2023-24 fiscal year budget.

Historic Salisbury Foundation Executive Director Sada Stewart said the plans are only at 25% currently, but that the project has been in the works for some time now. Though a pedestrian bridge was originally suggested for the station, Stewart said it would have destroyed some of the historical pieces and architecture of the station. The plans now include an “innovative tunnel underground with matching architectural aspects,” she said.

The improvements are expected to drive more traffic, Stewart said, as it increases accessibility to places like Raleigh, Greensboro and Charlotte.

“It’s a really iconic piece of infrastructure for the city, so we’re lucky the (NCDOT) is willing to work with us,” she said. “The tunnel won’t be an intrusive new modern addition. The best form of preservation is keeping (landmarks) in use, especially with how they were intended to be used.”

Mayor Karen Alexander also praised the impact that the improvements will have on the city.

“I believe this project will contribute to both much needed passenger safety and freight movement efficiency,” Alexander told the Post. “Both of which will add to economic development opportunities for our city as the high speed rail trains increase the stops in Salisbury.”