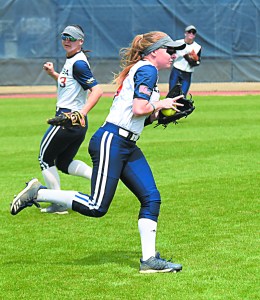 They’ve matched the school record set by the 2016 team for the best start in program history.

Brittany Ireland, a freshman from Dunn, is on a slugging rampage and was the key figure on Sunday.

In the 11-2 win, Ireland hit a three-run homer and Allie Baker had a bases-clearing triple. Brooke Walser (5-0) had another strong start and held Georgia College to five hits.

In the second game, Georgia College put up a fight, even after Ireland launched a grand slam.

Jordan Dean had a solo homer for the Indians.

Ireland got the RBI single that put Catawba ahead to stay.

Freshman Whitley Arnott, the former West Rowan star, made her college debut and pitched five strong innings for the win.

Catawba is batting .337 as a team. Besides Ireland, Gracie Gibson, Carlee Brawley, Baker and Dean have started every game and are hitting well over .300.