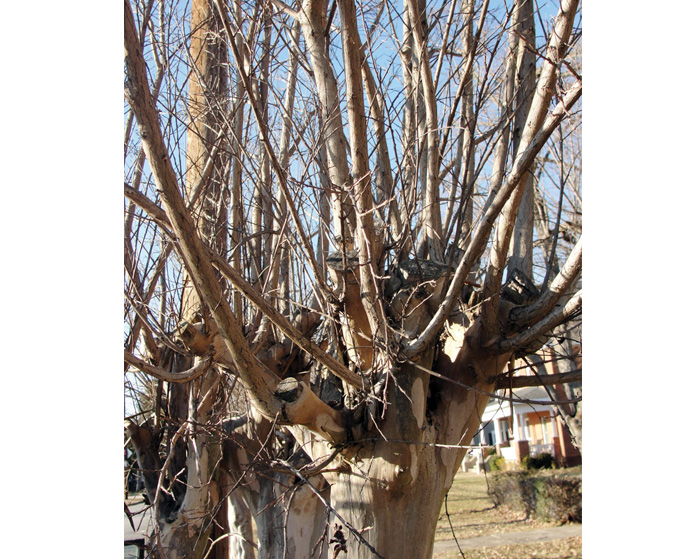 In the spring as the weather changes, many are concerned about pruning crape myrtles. Hacking the tops of crape myrtles has become a common practice in Rowan County as often referred as “Crape Murder.”

The motive for this annual bloodshed is varied. Some believe that heavy pruning is required to promote flowering; some prune because the plant is too large for the space provided. Others see their neighbors or landscape contractors pruning it and feel the need to follow suit. Crape myrtles do not require heavy pruning to promote bloom. Crape myrtles lining city streets receive little or no pruning and bloom profusely each summer. Flowers are borne on new growth. Newly developed dwarf crape myrtle trees produce flowers without any pruning, however, light, judicious pruning produce larger flowers with more profuse blooms. Judicious pruning in late winter or early spring stimulates vigorous new growth in the spring. These plants can also be encouraged to bloom a second time in summer by pruning flowers immediately after they fade.  Some want to improve the appearance of the trees by removing the seed heads before new spring growth begins. This is recommended if within reach, but once the plant becomes a tall tree, let nature to take its course and retain the natural grace of the plant. 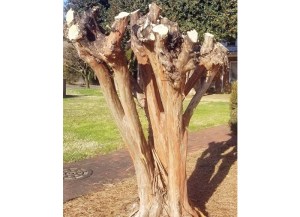 Judicious pruning should be practiced as crape myrtles grow and mature. Pruning weak, dead or damaged branches should be done on a routine basis. Crossing branches or those that rub should also be removed. Crape myrtles are usually grown as multi-trunked trees requiring corrective pruning at an early age. Trees are usually pruned to retain three major tree trunks. Remove suckers near the base as they appear in the early summer to keep the trunks neat and balanced. Without training the trees will mature into trees with multiple trunks. Crape myrtles grow best in well-drained soils with direct sunlight. An ideal location is an area that allows the tree to develop their natural growth habit without mutilating their tops.

If you have a crape myrtle in an area where you need a smaller plant, you have two basic options: Dig it up and plant a new dwarf cultivar that will require little or no maintenance or prune the stems back to about six inches above the ground each year. Crape myrtles are quite forgiving so severe pruning most often will not kill or injure a healthy crape myrtle. The best way to maintain a crape myrtle at a particular size is to plant a known cultivar that will mature at the desired height and spread. Go to https://plants.ces.ncsu.edu/plants/lagerstroemia/  for more information on cultural habits and new varieties.