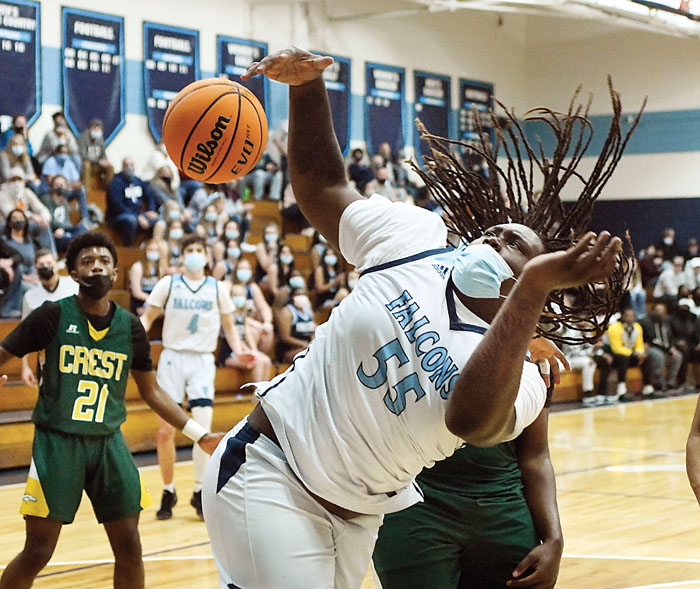 MOUNT ULLA — Crest point guard Mari Adams shot 21 free throws and made 16, as the Chargers rallied to beat West Rowan 66-62 on Saturday in the third round of the 3A state playoffs.

Adams’ last two free throws came with eight seconds left. With a loud and sizable crowd hanging on the edges of seats, he pushed a precarious two-point lead to a very secure four, and ended what had been a tremendous season for West Rowan.

While the game was played on West’s home floor, this was a regional semifinal, the level of game that once was played at neutral sites such as Hickory, Winston-Salem or Greensboro.

West hadn’t progressed this far in the playoffs in a full decade, so it was a gratifying season for West coach Mike Gurley. It included banners — a North Piedmont Conference co-championship and the NPC tournament title.

Crest, coached by Gurley’s old friend  Brad LeVine — they’ve known each other since their jayvee coaching days three decades ago — didn’t look much like a 16-1 conference champ in the first half, but the fourth-seeded Chargers were a different team after the break.

Top-seeded West (15-2)  built a lead with a second-quarter flurry. Braden Graham made layups around an offensive-rebound bucket by Macari Allison and a blocked shot by Zeek Biggers and the Falcons went to halftime with a 26-17 lead over the cold-shooting Chargers.

But Crest owned the third quarter, outscoring the Falcons 24-12.

Ray Hall scored all six of his points in the third quarter for the Chargers, and Jadin Merritt and Caleb Borders made 3-pointers, as the game turned around. West’s marksmen went cold and by the  the end of the third quarter, Crest had erased all of its deficit and was ahead 41-38.

West stayed in it, even with several of its normal scorers, having tough nights.

A three-point play by Adams at the 1:40 mark gave Crest a bit of separation, pumping a three-point lead up to 58-52.

Graham made several shots, including a 3-pointer, to give the Falcons a chance, but Crest was steady at the foul line. Borders calmly made two huge ones with 15 seconds left for a 64-60 lead.

After a driving hoop by Graham with nine seconds left, West was still alive, but then Adams made his two free throws to shut the door.

Graham scored 20. A foul-plagued Jalen Moss got eight of his 14 in the fourth quarter, but he wasn’t around at the end. Biggers scored 10, while Allison had nine.

Snider wins at Homestead after Gragson slams into lapped…