Duke falls to Louisville in overtime 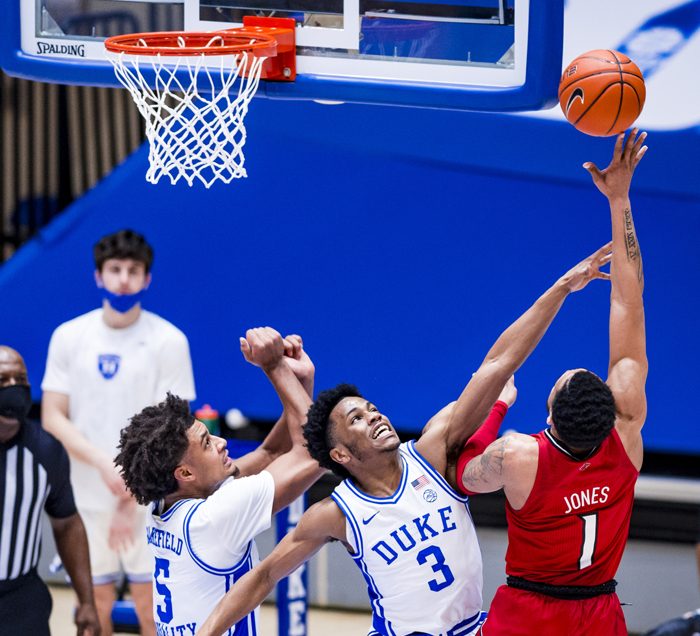 DURHAM (AP) — Carlik Jones scored seven of his 25 points in overtime, sophomore Quinn Slazinski opened the scoring in OT with a 3-pointer and Louisville fended off Duke 80-73 on Saturday night, halting the Blue Devils’ late-season win streak at four games.

Jones, a graduate transfer from Radford, scored 24 points when Louisville defeated Duke 70-65 on Jan. 23 — making this the first regular-season sweep for the Cardinals against the Blue Devils.

Matthew Hurt led the Blue Devils with a career-high 37 points — tying the most points by a Duke player in the last 15 seasons (Grayson Allen 2017).

Wendell Moore Jr., who scored 13 points, made four straight free throws in the final 1:20 of regulation to give Duke a 65-64 lead with 36.9 seconds left. Jones was fouled on a drive in the lane at 13.5, and made 1 of 2 free throws to tie it before Withers secured the offensive rebound. Jones had another attempt to win it, but his pull-up jumper was off the mark.

After Louisville took a 40-28 lead early in the second half, Hurt scored 13 points in a nearly seven minute span as Duke grabbed a 53-52 lead. Williamson wrapped back-to-back layups — each on an assist from Jones — around a Hurt basket as the Cardinals led 58-57.

Duke (11-9, 9-7) still leads the overall series with Louisville, 10-9, but the Cardinals have won three straight. Hurt has been on a late-season tear, entering Saturday’s game averaging 20.8 points during Duke’s four-game win streak.