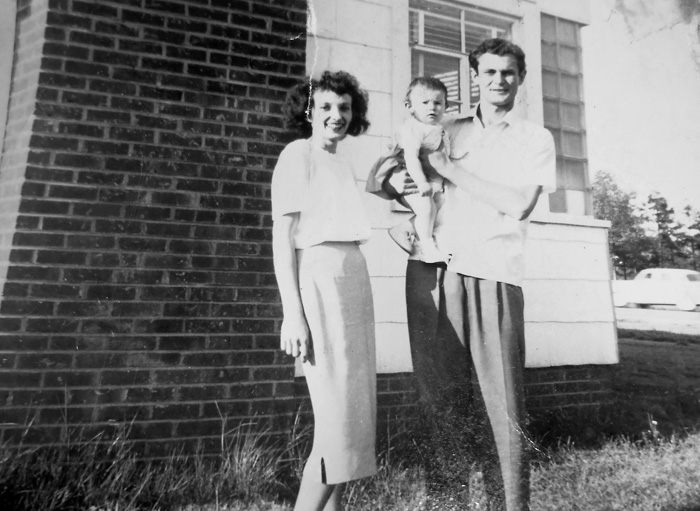 It was called Correll Park, not far from St. Paul’s Lutheran Church.

My mother said all the houses in our neighborhood once belonged to the Corrells, who lived in a small farmhouse three houses from ours. While still standing, it has definitely seen better days. The last parent of the ’50s and and early ’60s time died last month. He lived beside us in a house which was built in this same time period. Most of the other houses around us were built in the late ’40s or early ’50s too.

The neighbors had fought “The Big War” married and had us kids. The kids we played with and fought with on occasion.  The Ritchies, the Wilhelms, the Hendrens, the Safrits and the Pages were some of the names in Correll Park.

Another death also occurred last month, too. The mother of my cousin and childhood best friend died also. They lived just down the road. They were 93 and 92 years old and raised us, the Baby Boomers. We were born between 1946 and about 1968 to these veterans and their wives after they returned home.

There is a tendency to paint the ’50s and early ’60s as an idealized time with none of the dissension we have today. To an extent, this is true. We organized our own games — baseball, football and even fashioning a mini golf course at the Hendrens using orange juice cans and sawed-off broom handles as clubs. We built forts in huge snows we never seem to get any more and fashioned sleds out of old washer machine panels, which worked great. It could really fly across the frozen turf. Nothing was thrown away. So the supply of old washers was plentiful.

We would careen down hills in the woods, crashing into trees, and just get up, pull our Sunbeam bread wrapper “boots” up around our shoes and go again. When our feet started to ache, we knew it was time to go in for a break.

Our parents did not hover. Dads worked. Moms worked some, part-time maybe, and cooked, cleaned and got us ready to go to whatever the church had going on. Each house had gardens that were tilled, picked and preserved by canning and more canning. I remember sitting out under the shade trees in those days of no air conditioning with grown ups and “snap beans” while listening to the latest neighborhood gossip.

However, families in Correll Park faced issues we have today, too. Some of the problems included making sure their aging parents were taken care of. I vividly remember several of these surrogate “grandparents” moving into newly added-on additions, thus exposing us to the elderly in settings other than a nursing home or assisted living facility.

One example was “Grandma Wilhelm” across the road. She sewed clothes for me and she kept me while my mother went to the hospital to get a new brother, I am told. She always wore a bonnet outside and worked in the garden nonstop. Another issue I observed first-hand was a family who had what we now refer to as a “special-needs child.” I would like to say he was welcomed by his contemporaries but, well, he was different and kids on the bus were not kind to him, to put it mildly. I should have said something to the bullies back then, but your best bet was to keep your head down and be grateful you could find a seat with a friendly face whom you could talk to, as Forrest Gump discovered when he started school.

The buses were driven by 16- and 17-year-olds whose job was to get us to school and back amid the barrage of spit wads whizzing by. So, we were not perfect by any means. Our family faced job concerns when the Spencer Transfer Shed shut down when the Spencer Railway shops closed also. Daddy had to learn new skills taught to him and became a foreman of crews who put HVAC systems in mills that dotted all the landscape of the southeast then. I watched him open blueprints and “read” those strange drawings without ever earning a high school diploma because he went to fight in the Navy at 17 during World War II.

There was always someone to offer a “hand up” when the situation called for it. You just instinctively knew it.

In a Facebook post after these deaths, I said that there are few of these Greatest Generation folks left. They are the people who lived through The Great Depression, fought in World War II, came home, married and had us, slightly spoiled Baby Boomers. If you know any of the few who are left, show your gratitude to them for a job well done.

Denise Padgett Foutz worked for 28 years in Rowan-Salisbury schools as a reading tutor and still private tutors a few children in reading.