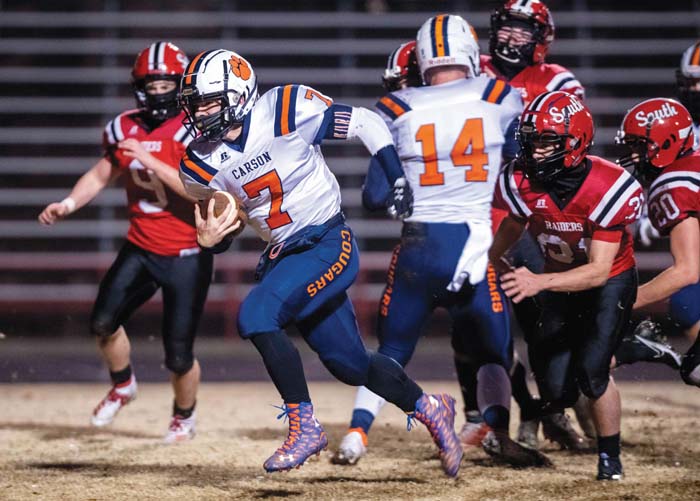 LANDIS — February football is far from ideal, but it agreed with Carson on Saturday.

The Cougars finally launched this pandemic-delayed season with an exclamation point, trouncing host South Rowan 41-0 before about 600 bundled spectators.

“I’m excited for our program,” second-year coach Daniel Crosby said after Carson limited the Raiders to nine first downs and 85 total yards. “We were ready for this and had a good feeling after our scrimmage. We did what we thought we were going to do.”

Carson rode the steady right arm of senior quarterback Alex London and marched for touchdowns on six of its nine possessions. London managed the game like he was conducting the Boston Pops, completing 12 of 18 passes for 165 yards, tossing a 49-yard touchdown to receiver Brodie Johnson and scampering  20 yards for a second-quarter score.

“He’s a phenomenal kid, a phenomenal athlete,” South coach Daniel Yow said. “He controlled his offense and we weren’t able to get any pressure on him to make him uncomfortable. He picked us apart.”

London and the Cougars announced their intentions on their first possession. Carson drove 73 yards on 12 plays for its opening TD — a 3-yard burst by halfback Carter Dowd with 4:17 remaining in the first period. Key plays on the drive included a third-down completion to senior CP Pyle, a 12-yard pickup by receiver Jacob Bost and a 19-yard gain to sophomore wideout Emory Taylor.

“We spent a lot of time throughout the fall working on our passing game,” Crosby noted. “There were times last season where people stacked the box on us and we weren’t able to throw it. So we knew if we wanted to be successful going forward, we had to find a way to spread it around tonight. South did a good job on defense taking away our over-the-top plays. But other than that, we were able to execute and run our plays down the field.”

Seven different players caught passes from London, a returning starter from Carson’s disappointing 2019 squad. Working behind a seasoned offensive line, the Cougars amassed 372 total yards, including 207 on the ground. Pyle bumped and bruised his way for 85 yards on 17 carries, but never reached paydirt. Dowd and teammate Jordan Garland (47 yards/7 carries) each made a pair of end zone appearances.

“We were strong up front,” said Crosby, a former South Rowan linebacker. ” I was nervous about what they’d do on defense, having guys running free. But tonight our O-line was able to pick up anything they brought.”

Touchdown runs by Garland and London helped Carson build a 21-0 halftime advantage. And when Johnson turned a fingertip catch over the middle into a 49-yard touchdown midway through the third quarter, the outcome seemed secure.

“The game just got away from us,” Yow said afterward. “We spent most of the night making blocks, but not sustaining them. Still, I liked the effort. We obviously played hard. These kids are upset right now, but they’re only upset because we played so hard. We made a lot of mistakes, myself included. I didn’t do a good job of managing our play clock. But it’s been so long since we were on the field, I’ve forgotten what 40 seconds feels like. It’s all stuff to build off of.”

Carson closed the scoring with Dowd’s second TD late in the third quarter Garland’s 1-yard walk-in with 8:06 to play. South, meanwhile, didn’t take a snap in Cougars’ territory until 1:47 remained in the third stanza. Quarterback Nathan Chrismon  completed four of nine passes for 46 yards and rushed for another 18.

“Playing in the winter is not what we wanted,” Crosby concluded. “But it actually turned out to be pretty humid tonight. I’m soaking wet from sweat right now. We’re just excited to be playing — 1-0, there’s nothing better than that.”

NOTES: Crosby made a point of  crediting the play of Carson’s offensive line, which helped produce 19 CHS first downs. “They did a tremendous job and the running backs hit the holes,” he said. “They were keeping everything in front of them, so we were able to get five or 10 (yards) a pop. That was huge. Giving out pants today we ran out of big sizes — and that’s a good thing.” … South’s Hunter McKinney had an interception and Carson’s Aaron Bradshaw recovered a fumble. … The Raiders open CCC play next Friday at East Davidson. Carson host Mount Pleasant in another non-leaguer.