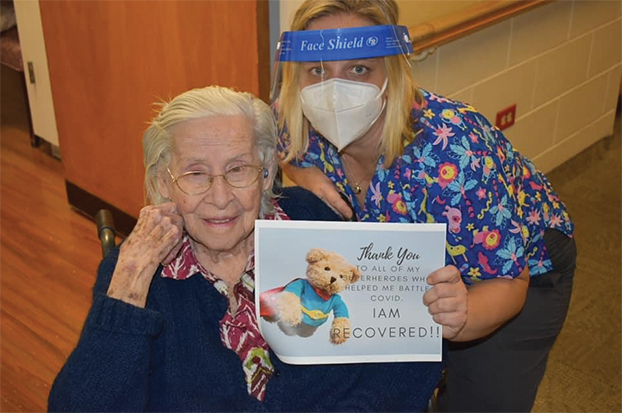 After a difficult bout with COVID-19 in September, Lois Willard recovered and is poised to celebrate her 100th birthday on Monday. Photo submitted.

SALISBURY — Looking into her iPhone screen, Kim Bowden said her last goodbyes to her grandmother.

At least, that’s what she thought.

Bowden, a teaching assistant at Hurley Elementary School, stepped out of class on the morning of Friday, Sept. 4, to accept a FaceTime call. It was from a nurse at the Lutheran Home at Trinity Oaks, where her grandmother Lois Willard was lying in bed, hooked up to a morphine drip.

Willard, about six months shy of her 100th birthday, was suffering from COVID-19 and had taken a turn for the worse.

“They called us on that Friday and said ‘We’re going to set you all up on FaceTime because it’s very unlikely that she’s going to make it through the day,’” Bowden said. “We FaceTimed and she had that look about her. It looked like she was dying.”

Bowden carried the weight of her family’s impending loss with her throughout the day. It kept her up most of the night. When she woke up the next morning, she expected a call notifying her that Willard had passed.

Bowden did get a call, but it wasn’t the one she anticipated with dread.

“The following day, they FaceTimed us and she was sitting up in the bed looking for her hairbrush,” Bowden said.

About a week and a half later, Bowden’s phone pinged with a message notification. It was a picture of Willard, fully dressed and standing upright, holding a sign announcing that she tested negative for COVID-19.

On Monday, Willard will get to celebrate her 100th birthday.

Born on March 1, 1921, Willard spent her earliest years in a house near Southmont that was eventually depicted by local artist Bob Timberlake in his painting “Late Snow at Riverwood.” She was one of 10 siblings.

Willard’s large family eventually moved to Lexington, where she did most of her growing up. She started working for the North Carolina Finishing Company, which is where she met her late husband Grover Willard. The couple moved to Salisbury soon after their wedding and had one daughter, Ann Connell. 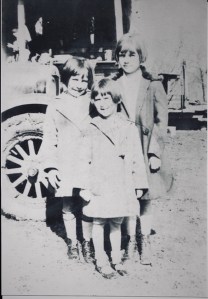 Willard then went on to work as a seamstress at Quick As A Wink Cleaners.

Whether she was working or had a day off, Willard always believed in staying busy, Bowden said.

“Until she could no longer do it, she was a firm believer in going to work,” Bowden said. “She felt like if she stopped working, that’s when her health would decline. She believed in getting up every morning and working and having a goal everyday to accomplish.”

Willard worked at the cleaners into her early 70s before retiring. Even then, she found ways to stay busy, whether it was cooking or doing yard work. Chris Connell, her grandson, remembers dining on her fried chicken, sweet potatoes and cornbread. Bowden said it wasn’t uncommon for Willard to bake fresh bread daily.

Willard, who lived by herself until she was in her 90s, was also a prolific crocheter.

“Whenever my kids needed a gift for one of their teachers growing up, they knew they were supposed to go to her,” Bowden said.

When she wasn’t doing yard work, cooking or crocheting, Willard was spoiling her grandson, Connell.

“My sister and mom would always tell me, she played me as a favorite because she always wanted a grandson,” Connell said. “She was always there for me. When I was little, about every Saturday she would pick me up and take me to eat wherever I wanted for lunch.

Willard would then take him to a store and let him pick out any toy he wanted.

“Anything he wanted, she bought,” Bowden said. “He would come home many times and I can still hear my mom having a fit about something he asked for that they said not now on and come Saturday he came home with it.”

After seeing his grandmother, who everyone in the family calls “Mimi,” remain so healthy throughout her life, Connell was shocked at what he saw on FaceTime when he was called to say his farewells in early September.

“I’d never seen her sick,” Connell said. “It was really different because, since COVID, we hadn’t been able to see her since her last birthday in March 2020 when all of this started. I hadn’t seen her in a long time and to see her like that was shocking. It was upsetting.”

Lois Willard celebrated her 99th birthday with her two grandchildren, Kim Bowden and Chris Connell, and four of her great grandchildren. Photo submitted.

Willard didn’t believe in going to doctors, Connell and Bowden said, and the only medical treatment she took during her life was swallowing a baby aspirin every day.

“She had two procedures. She had my mom and cataract surgery. That was it,” Bowden said. “Never had health issues in her life. When my mom took (Willard) years ago to have her cataract surgery, she didn’t even understand what the IV was for.”

Willard’s immune system proved sturdy once again when she was able to get past COVID-19.

“It was like ‘Hallelujah,’” said Evelyne Swing, Willard’s niece in-law. “It was amazing to us that she pulled out of it. We weren’t expecting that.”

Although Willard’s family can’t hold a traditional birthday party, Bowden and Connell plan on visiting her in some capacity at Trinity Oaks on Monday.

There will be a drive-thru parade to celebrate Willard’s 100th birthday outside of the Lutheran Home at Trinity Oaks on Saturday at 1 p.m. To participate in the celebration, contact Kim Bowden at bowdenka@rss.k12.nc.us.