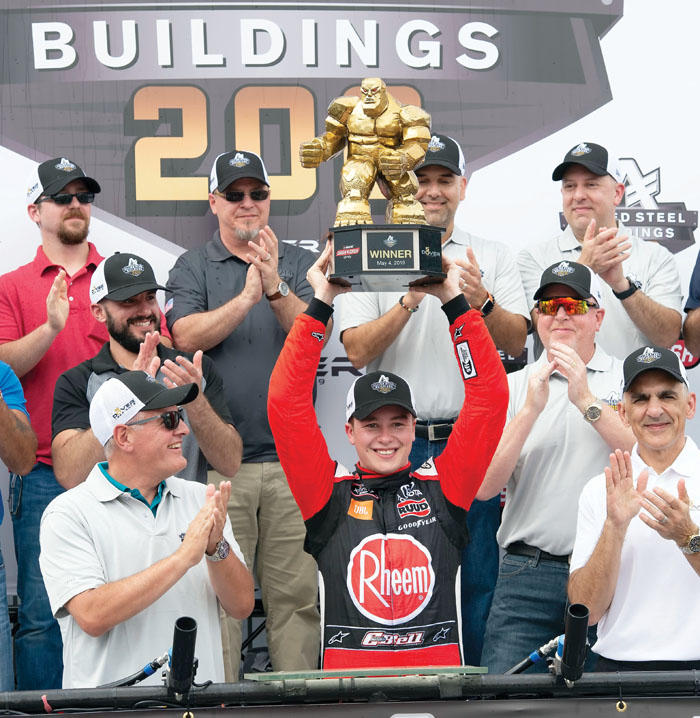 CHARLOTTE (AP) — Two races into his return to Joe Gibbs Racing, Christopher Bell already has both a Cup Series victory and, more important, some of his confidence back.

Bell plodded through a rocky rookie season last year while on loan to another team. JGR didn’t have an open Cup car for the longtime Toyota development driver, so Bell was moved outside the organization to log seat time.

His time with Leavine Family Racing — a team that closed at the end of last season — was one of the worst of his young career. Bell had won at every level of his climb to Cup but had only two top-five finishes with Leavine.

Team owner Joe Gibbs let Erik Jones go and instead brought Bell back into the organization, where Bell knew “I’m either going to put up or shut up.” He delivered last week in his second Cup race with the team with a victory on the road course at Daytona International Speedway.

“It’s been really fun to be relevant again,” Bell said. “I felt like I’d fallen off the face of the earth the last 12 months.”

The weekend sweep by two of JGR’s youngest drivers was somewhat of a surprise. Although Ty Gibbs won eight ARCA Series races the last two years, it wasn’t a true indicator of his talent. Any driver in superior Gibbs equipment should contend for wins.

JGR moved Gibbs up two levels for a crack at the Xfinity Series and Daytona’s road course race was supposed to be a good place to get a feel for a more powerful car. He’d never before performed a live pit stop and there was no practice or qualifying before the race.

Even so, Gibbs was fearless. He powered his Toyota through the grass, around the competition and past reigning Xfinity Series champion Austin Cindric to score the win.

Two days after the victory, JGR announced an additional 14 Xfinity races for Gibbs this season.

Bell was expected to be improved driving Gibbs cars again. He’d won 16 Xfinity Series races in JGR cars, but after struggling through his first Cup season, even crew chief Adam Stevens figured it would take time to get Bell to victory lane.

“Me and Adam talked a lot this offseason about not trying to get too much too early and not trying too hard too early,” Bell said. “I would ask Adam, ‘Why can’t we win at the second race of the season at the Daytona road course? That race was a great race for me last year. Why can’t we win that?’

“His reply was ‘There is no reason that we can’t, we just don’t need to push our issue too hard and make a mistake.’ ”

The sweep showed that JGR, already among the best teams in NASCAR, is will positioned for the future. The four-car Cup team features series champions Kyle Busch and Martin Truex Jr., as well as three-time Daytona 500 winner Denny Hamlin.

“The more competitive cars that we can have in the Toyota stable, the more information that we can share,” Hamlin said.

The sweep was also validation for the development program Toyota has nurtured.
Bell has been backed by the manufacturer since his days running dirt races a decade ago. He won the Truck Series championship in 2017 and raced in the championship round for the Xfinity title in 2018 and 2019.

The Cup win last weekend made Bell the “first development driver that came all the way from dirt to winning at the highest level of North American motorsports,” said David Wilson, president of Toyota Racing Development.

Both Jones and Daniel Suarez advanced through Toyota’s program to the Cup Series, Harrison Burton is an Xfinity Series contender with Gibbs, and Christian Eckes and Chandler Smith compete in the Truck Series.

Now Ty Gibbs appears to be fast-tracked to the big leagues and Wilson couldn’t be prouder of the effort Toyota has put behind drivers.

“Christopher Bell’s win on Sunday, for me, justifies every dollar we’ve spent,” Wilson said. “Every hour we’ve spent. All the blood, sweat, and tears. You find one Hope Diamond, and all the hours of mining make it worthwhile.”