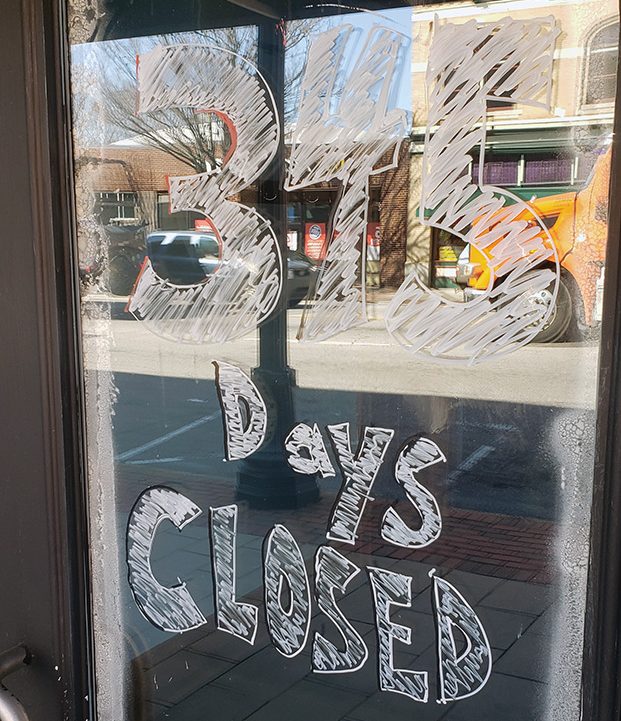 Chris Ostle has been updating the number of days that The Fish Bowl has been closed during the pandemic on the bar's front door. Photo submitted.

SALISBURY — Waking up on Wednesday morning, Chris Ostle felt like a kid on Christmas day.

“I was so excited,” Ostle said. “The sun was out, it was a beautiful day. It was like the world was starting again. It was so great.”

Although Gov. Roy Cooper wasn’t scheduled to speak until 2 p.m., Ostle said he already had a pretty good idea that the governor was going to announce an easing of COVID-19 restrictions on a variety of businesses, including bars like The Fish Bowl in downtown Salisbury that Ostle co-owns with Branson Hurst.

Every day for the previous several months, Ostle has written the number of days the bar has been closed during the pandemic on the front window. The number currently stands at 345. And that’s where it’ll stay now that Cooper has given bars the green light to open indoors at 30% capacity (up to 250 people per indoor space) since the beginning of the pandemic.

Cooper’s new executive order, which goes into effect at 5 p.m. today, also lifts another order, making it so that individuals no longer must stay at home between 10 p.m. and 5 a.m.

Back to the bars

Part of Ostle’s daily routine during the pandemic has been to send an email to Cooper’s office and plead with him to lift restrictions barring customers from patronizing The Fish Bowl.

“Every day, if not twice a day,” Ostle said. “I get the canned email response thanking me for my submission and saying they’ll get back to me if it’s important. I never heard anything back.”

Ostle’s email correspondence with Cooper’s office ended yesterday. That’s because, with the ability to open indoors at 30% capacity, Ostle will be able to serve 80 patrons at one time. He said that should be enough to make the bar profitable once again.

As of right now, Ostle said that The Fish Bowl has no plans to bring in live entertainment. All he wants, he said, is to keep it simple and give people a bar to go to again.

In addition to increasing the capacity limit, Cooper also allowed bars to stay open later than 10 p.m. and extended the cutoff for alcohol sales from 9 to 11 p.m.

Ostle said he’s already placed orders for liquor and beer and is preparing to reopen The Fish Bowl as soon as the governor’s new order goes into effect today at 5 p.m.

“We’ll be there at 5 o’clock,” Ostle said. “We posted it on our Facebook page and we got a huge response. I don’t really know what to expect.”

Tiffany Day, the bar manager of Sgt. Pepper’s at the Italian Grill, expects customers to enjoy being able to order drinks past 9 p.m.

“I think people will really like not getting cut off at 9,” Day said. “Even if it’s just a handful of people left, they’re not ready to leave at nine.”

Since Sgt. Pepper’s is part of the Italian Grill and offers a full food menu to customers, it is classified as a restaurant and has been able to operate at 50% capacity, about 15 people. Day said the later alcohol curfew will allow Sgt. Pepper’s to extend its hours to 10 p.m. on weeknights and 11 p.m. on the weekends.

The later cutoff will also allow Sgt. Pepper’s to offer more live music events on its patio, which is located near the bar and grill’s alleyway entrance. Day said that she’s “thrilled” for the other bars in town who have been more heavily impacted by the restrictions.

“I’m excited for my friends and neighbors and for all of these places around town who really haven’t been able to be open,” Day said. “I’ve been worried about them and I’m really glad they’re able to open again.”

Although the team released its season schedule last week, it wasn’t until Cooper announced that stadiums were permitted to operate at 30% capacity that Millward knew fans would be able to watch the team’s inaugural season at Atrium Health Ballpark.

“I’d be lying to you if I told you I wasn’t smiling from ear to ear,” Millward said. “As long as things don’t go backwards, we’ll have fans in the stands for opening day.”

Millward said the team is still trying to determine how many fans can watch a game in the park at 30% capacity. He estimates it will be anywhere from 1,500-1,800 patrons.

Whether it’s the low end or high of that estimate, Millward doesn’t think the Cannon Ballers will struggle to fill the stadium as allowed.

“I’m confident we definitely will be able to (fill out capacity),” Millward said.

The team will give priority to season ticket holders and fans who purchase mini-packages, but Millward said he hopes they’ll be able to offer individual game tickets as well. Millward said the number of season ticket packages sold received a bump when the team released its schedule last week.

“It’s been an amazing response thus far in terms of exceeding expectations for ticket sales, partial plans, mini plans. It’s been incredible,” Millward said. “It’s like a lightbulb switched on.”

There are still season ticket packages available, Millward said, but the best seats are going quick.

With almost 70 days until the Cannon Ballers throw the first pitch on May 4, there may be even more room for more fans in the stadium if COVID-19 case numbers drop and vaccination rates increase.

“We still have 67 days until opening day, so there’s a chance that could improve even more as time goes on,” Millward said. “We’re staying optimistic, but (1,500-1,800 fans) is the baseline we’re preparing for.”

The Cannon Ballers will host a town hall meeting over Zoom next week with season ticket holders to go over health and safety procedures that will be in place in Atrium Health Ballpark this year.

With Cooper lifting the modified stay at home order, Matt Marsh, co-owner of The Forum, said the gym will once again extend its hours from 4 a.m. to midnight.

“That’ll help alleviate some of the busy times from 8 to 9 p.m. where it would get busy,” Marsh said.

On Thursday morning, Marsh said that he already heard from some of the gym’s early-bird exercisers that they’ll be taking advantage of the extra hour in the morning to work out.

Marsh was also excited that he will be able to operate at 50% capacity as opposed to just 30%.

While the gym rarely never had to turn guests away due to capacity restrictions, Marsh said they were wary of giving guests promotional membership passes so that members weren’t forced out if the capacity limit was reached.

Being able to open to half capacity, Marsh said, will allow him to better recruit new members. He said that he’s optimistic that more restrictions will be loosened in the coming months and the gym will eventually get back to a “new normal.”