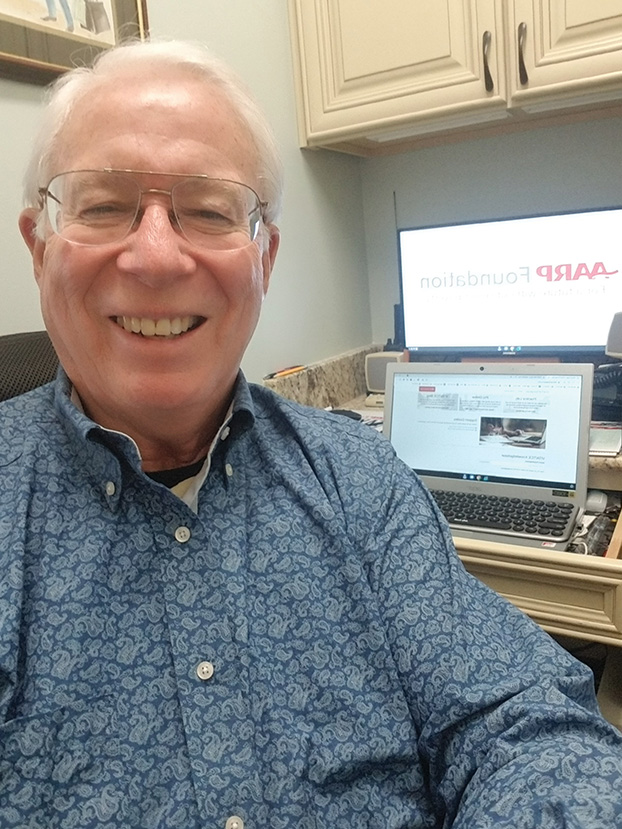 Richard Paschall has helped review tax documents free of charge largely from the home office in his cottage at Trinity Oaks this year. Photo submitted.

He doesn’t run an accounting firm, but Behrendt is the local coordinator for a volunteer-led effort sponsored by AARP to help senior citizens and low-income individuals in Rowan County file their tax returns. Every Tuesday from early February through mid-April, he’s organized a group of about 25 volunteers that has gathered in a room at Rufty-Holmes Senior Center to help hundreds of people complete their taxes free of charge.

Since taking over as coordinator about 20 years ago, Behrendt has helped lead the effort through changes in tax law and technological advances.

“When I came in, we were just starting to get used to using computers to prepare the tax return,” said Behrendt, a retired electrical engineer who moved to Salisbury from New Jersey. “Since then it has grown exponentially with different things being put into the tax code that we have to deal with. It’s been a challenge every year to learn the new things and keep up with what’s required from us.”

But no year has been more challenging than this one, Behrendt said.

Due to COVID-19, the reduced group of volunteers completely overhauled its procedures and adapted its technological capabilities.

The changes started in December with the way volunteers are trained. Instead of conducting in-person sessions, the volunteers learned about new tax laws from instructor Kenny Hayes on weekly video calls.

The amount of volunteer participation this year, Behrendt said, is lower than usual.

“Some of our people that normally help us declined because they didn’t want to be in contact with clients, so we are down to just 16 this season,” Behrendt said.

Although most of the work intaking and preparing tax information is being done by volunteers from home this year, a handful still meets with clients on Tuesdays at Rufty-Holmes to collect the information needed to file.

Instead of cycling hundreds of clients through in a single day, now only three are allowed into the room at one time for appointments every 30 minutes. The clients and volunteers remain masked and sit across from each other at long tables.

The first day that volunteers accepted tax documents was Tuesday of this week, which is later than usual. The hold up, Behrendt said, was a result of the volunteers having to get permission to take client tax documents home with them to input them using TaxSlayer software.

Richard Paschall, who has volunteered to help with taxes since 2017, said that he already misses the personal connection he enjoyed in years past.

“Getting to know the people around me and understand their situation was a real joy,” said Paschall, who moved to Salisbury from the Raleigh area. “That’s what I’ve enjoyed most of all is the camaraderie and personal relationship I’ve formed. In subsequent years, I remember people coming back who I had worked with the prior year.”

This year, as part of the document review team, Paschall works mainly from two computers in a pantry-turned office in his cottage at Trinity Oaks. One of those computers is a Google Chromebook, loaned to volunteers by AARP. The Chromebook is the only device on which volunteers are allowed to access the tax software on, Behrendt said.

Paschall will still get the opportunity to interact with clients in person when he meets with them at Rufty-Holmes on Thursdays, nine days after their information was collected. At that point, their documents will have been prepared and reviewed remotely. All Paschall will do then is check over the information with each client before officially filing the return.

In the past, the volunteers have filed tax returns for about 800 individuals. Due to COVID-19 safety protocols, Behrendt expects that number to be closer to 500 this spring.

Appointments, Behrendt said, have already been booked weeks in advance and the waitlist is still growing. If the process runs smoothly for a couple weeks, he said volunteers will consider increasing their capacity to accommodate the demand.

Filing taxes this year, Behrendt said, could be especially important.

“People really should file in order to make sure that they get any additional stimulus that may come from Congress,” Behrendt said.

Paschall said individuals could also be eligible for lost income credit if their earned income decreased from 2019 to 2020 as a result of COVID-19.

As of right now, the federal government has no plans to extend the federal tax-filing deadline past April 15 like it did last year. If that changes and the deadline is extended, Behrendt said that the volunteers will also extend their services.