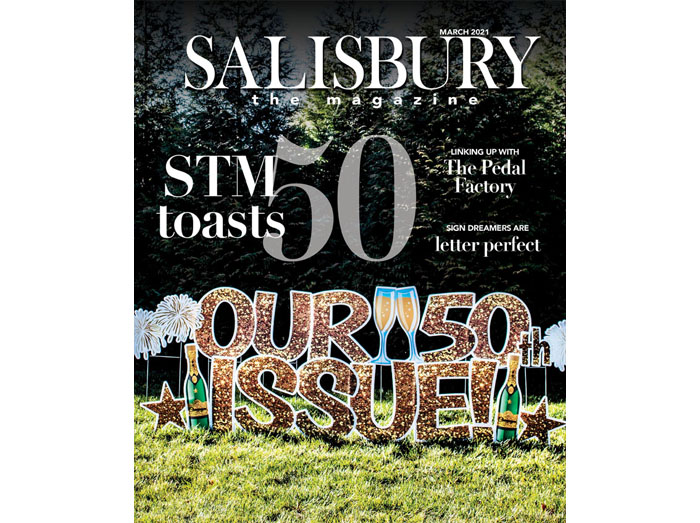 SALISBURY — The March issue of Salisbury the Magazine, a publication of the Salisbury Post, has reached subscribers and is now available at its normal distribution spots elsewhere.

Current and past issues of the magazine also can be secured at the Salisbury Post office, 131 W. Innes St.

The March edition represents Salisbury the Magazine’s 50th issue since its debut in September 2015. The cover celebrates that milestone with the help of a yard greeting message from Sign Dreamers of Rowan.

The story behind Anna and Luke Allman’s Sign Dreamers franchise in Rowan County is one of the features inside the March issue. Jon C. Lakey provides the photos on Sign Dreamers, plus the the images showcasing Julie Apone’s Blair Street cottage, which she lovingly has rejuvenated and surrounded with plants and flowers.

Elsewhere, writer Ben Stansell and photographer Sean Meyers tell the story behind the founding and operations of The Pedal Factory, a popular bicycle co-op in Salisbury.

Lakey is back again with his photos on the “roots barbecue” of Kevin Swicegood, who believes there’s nothing better than cooking over wood coals.

Contributing writer Kris Mueller tells of the impact East Rowan native Dr. Stacey Sigmon is having with opioid treatment through her research and programs at the University of Vermont.

Alissa Redmond provides her thoughts and reading recommendations in Bookish. The Through the Lens photo comes from the Rev. Steve Combs, and for Salisbury’s the Place, Creative Director Andy Mooney offers a graphic showing all of the 49 previous magazine covers.

Salisbury the Magazine publishes nine times a year. The April issue, now in the finishing stages, will be reaching subscribers sometime in mid to late March.