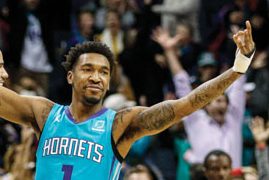 Phoenix lost for just the second time in 11 games. Suns star Devin Booker missed an off-balance 3-pointer at the buzzer with replays showing Gordon Hayward made contact with Booker’s arm. There was no foul call and the play wasn’t reviewed.

Charlotte trailed for most of the first half, then rallied to take a 97-91 lead by the end of the third quarter. The Hornets pushed ahead by 11 points midway through the fourth but Phoenix scored 11 straight points — capped by Booker’ dunk — to tie it at 110.

Charlotte responded with the next seven points. Two came on a perfect alley-oop pass from Ball to Miles Bridges and then Bridges knocked down a 3-pointer on the next possession. After a Phoenix timeout, Ball slammed home a dunk after slicing down the lane and the Hornets didn’t trail again.

Booker was named to his second straight All-Star team as an injury replacement for Lakers forward Anthony Davis a few hours before Wednesday’s game. He got a big ovation from the crowd during pregame introductions and put on a show in the first quarter, pouring in 16 points on 7 of 9 shooting.

Booker finished with 33 points on 13-of-24 shooting. Teammate Chris Paul — who also made the All-Star team for an 11th time — added 20 points, 10 assists and eight rebounds.

Hornets: Hayward was questionable with a right hand contusion but made his 29th start of the season. … Charlotte’s Terry Rozier was called for a technical in the third quarter after a no-call when Rozier appeared to get poked in the eye before he shot a 3-pointer. … Guard Devonte’ Graham didn’t play for a third straight game because of left knee discomfort. … Bismarck Biyombo had 11 rebounds.

Suns: Forward Abdel Nader didn’t play because of a left thumb strain. … Booker got a technical in the fourth quarter for jawing with Graham, who didn’t play and was sitting on the Hornets’ bench.