SALISBURY — Arbe Arbelaez had his first run-in with Toys for Tots as a punishment when he was in the Marine Corps, but he loved it.

“The Marine Corps is not just about going overseas and blowing things up,” Arbelaez said. “We have a bigger mission and they wanted me to be a part of it.”

Arbelaez was sent away to devote himself to the children’s charity for three months, and the branch let him keep doing it every year until he retired.

After he left the Corps, he moved to Salisbury and got the program rolling here as the coordinator for Rowan County. He is still here 19 years later, collecting toys like mad.

“What I tell people is it started out as a punishment that became an addiction,” Arbelaez said. “It’s a humbling experience to be able to help people, in a time of crisis especially.” 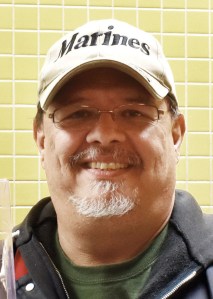 Arbe Arbelaez has been leading the Rowan Toys for Tots organization for over a decade, but his love for the program began when he was in the Marine Corps in the 1980s. Ben Stansell/Salisbury Post

Arbelaez said toys for kids at Christmastime lets them know they have not been left behind or forgotten. He recounted a personal story of his wife when she spent Christmas in the hospital. She thought Santa would not be able to find her.

Powles-Staton Funeral Director Russ Roakes credits Arbelaez for expanding the toy collection for the funeral home’s Operation Toy Soldier affiliate drive and contributing thousands of toys to the effort each year since he became involved.

Five years ago when Powles-Staton started its collections, it took in 200 toys. Arbelaez got involved the second year and it raked in 2,200. Now they collect more than 5,000.

Operation Toy Soldier is a national initiative by Rudolph and his funeral home Veterans Funeral Care to provide toys for children of service members. Powles-Staton collects more toys for the program than affiliates in markets that dwarf Rowan County.

Roakes decided he wanted to put together a surprise for Arbelaez for his efforts by tapping into a connection with a famous marine through Operation Toy Soldier: Gene Overstreet, who served as the 12th sergeant major of the Marine Corps.

Sergeant major rank is a unique rank and the highest enlisted rank in the Corps.

“The Marine Corps is a brutal meritocracy and the people that get that job are perfect Marines,” Rudolph said.

Overstreet served in Vietnam and served as an instructor. One of his tasks was the filming of the Corps entire drill manual. He was promoted to sergeant major in 1991 and retired from service in 1995.

Overstreet wrote a personal letter to Arbelaez thanking him for his work for the program. Arbelaez said he does not do this work for accolades, but it was emotional and humbling for someone like Overstreet to take notice.

“To us, as Marines, Sgt. Maj. Overstreet is like a rockstar,” Arbelaez said.

Arbelaez said every Marine wants to meet Overstreet and he was speechless to receive the letter.

“I’m just glad that I can give what I can,” Arbelaez said.