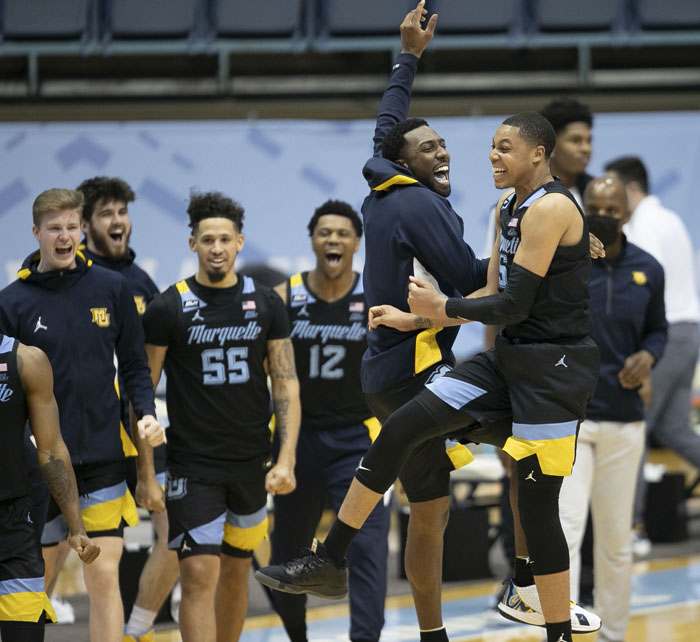 It was just North Carolina’s 18th nonconference defeat in the 35-year history of the Dean E. Smith Center.

North Carolina scored first but did not lead the rest of the way as Marquette answered with a 14-2 run. Garcia had 16 points in the first half and Greg Elliott added 13 as the Golden Eagles led 45-29.

Elliott scored 15 points and Theo John had 11 for Marquette (11-12). The Golden Eagles, who are currently 10th in the 11 team Big East, entered having lost six of their last eight — with two victories over Butler.

Clemson held its second opponent this season to less than 40 points in 40 minutes after topping South Carolina State 75-38 in its third game. The Demon Deacons were just 12-of-46 shooting (26.1%) — with only two makes in the final 10 minutes.

Carter Collins had 16 points and seven rebounds for the Wildcats (11-7, 6-4). Luka Brajkovic added 12 points. Kellan Grady, whose 18 points per game coming into the contest led the Wildcats, was held to only two points. He was 0 of 5 from 3-point range.

Faulkner hit what proved to be the game-winning 3-pointer with 53 seconds left, breaking a 78-78 tie. Isaiah Miller quickly answered with a layup before Faulkner missed another deep shot with 24 seconds to go.

The Catamounts got up two shots in the closing seconds but couldn’t connect.

The Catamounts leveled the season series against the Spartans. UNC Greensboro defeated Western Carolina 77-56 on Monday.

The Seminoles (14-3, 10-2 Atlantic Coast Conference) were never threatened after a 19-2 run early in the first half. Anthony Polite hit consecutive 3-pointers and Scottie Barnes’ jumper with 10:32 remaining capped the surge and increased Florida State’s lead to 27-8.

RaiQuan Gray had 12 points and 13 rebounds for the conference leading Seminoles, who have won nine of their last 10. Polite finished with 12 points and Balsa Koprivica was Florida State’s fourth double figure scorer with 13 points.