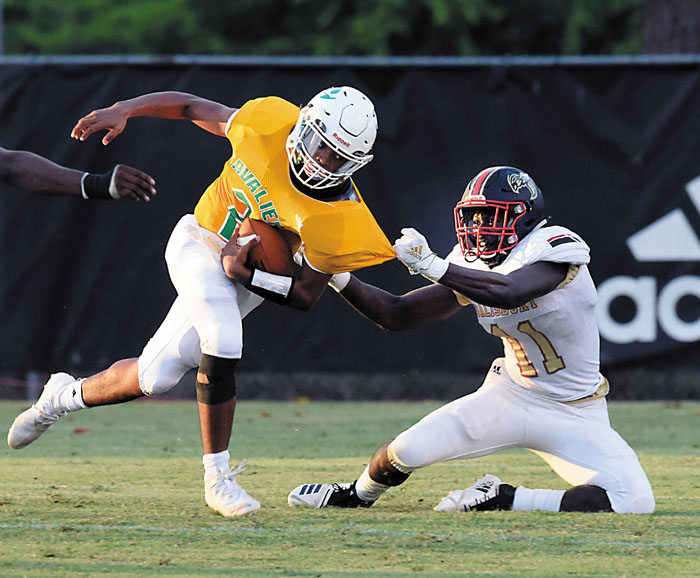 Salisbury’s Jalon Walker will be a key on defense for the Hornets. File photo by Wayne Hinshaw, for the Salisbury Post.

SALISBURY — The Salisbury football program’s sudden jump from 7-5 to 13-3 and recognition as a statewide power in 2A was startling.

What happened in the fall of 2019 was wild. One minute, Salisbury was struggling to score often enough to get past ordinary West Davidson and Central Davidson squads. The next thing you knew Salisbury was making charter bus trips to smash Eastern powers in the state playoffs. The Hornets finished their electrifying run as 2AA state runner-up to Shelby. They were the first Rowan team to play for a football state title since West Rowan in 2011. They tied the school record for victories.

“We got hot and peaked at the right time,” Hinson said.

The difference from 2018 to 2019 for SHS came mostly on the defensive side. The Hornets allowed two touchdowns fewer per game, an extraordinary improvement.

Can the Hornets sustain that lofty level of success in this shortened COVID season?

Probably. A high percentage of last season’s talented cast is still around.

But success brings weightier expectations and it brings everyone’s best shot, and there are multiple good teams in Salisbury’s league, the 2A Central Carolina Conference. Salisbury didn’t win the CCC last year. The Hornets were only part of a three-way tie for second place. Ledford, Oak Grove and North Davidson. They’re all on the short schedule. Those are stout programs with athletes, commitment and structure.

This season’s non-conference opener against West, a program Salisbury hasn’t defeated since 1996, has inspired a great deal of local interest and will be a good measuring stick. The programs haven’t played each other since 2014 when the Falcons romped 44-7.

“West is West,” Hinson said. “But it’s like I told our current seniors back when they were freshmen and I had just been hired at Salisbury, every game we play is a chance to get the respect back for Salisbury. Playing West is one more chance.”

Honeycutt threw 12 touchdown passes. He also ran for seven scores. He had 140 rushing yards in the first round of the playoffs.

“He’s sneaky fast,” Hinson said. “You don’t really realize it, until he’s running by you.”

JyMikaah Wells was one of the most impressive backups in history as a freshman last season. He scored 12 TDs in a limited role. Now it’s his show.

Jeremiah Booker and Marcus Cook, an improved player who will be used at multiple positions, are also available for carries.

The receiving corps could be impressive. Cook caught three TD passes in 2019. Christian Morgan, the exceptional hurdler, has breakaway speed.

Jackson Murphy is back. Chase Shoaf transferred from North Rowan and adds to Salisbury’s depth at the position. Freshmen Deuce Walker and Mike Geter are coming off the basketball court to help. Then there’s everyone’s All-America Jalon Walker. He’s famous as an outside linebacker, but the Hornets can throw it to him if necessary. He had three TD catches a year ago.

Josh Hill will be used in the H-back role, while Reed Fugle, the backup QB, can play a lot of positions.

There will be several new faces on the offensive line, but seniors Sam Evans and Tkaii Gaither are returning starters.

“Gaither is strong and athletic,” Hinson said. “And he plays hard.”

“He’s smart and he’s got a lot of want-to about him,” Hinson said.

Wade Robins, who had two field goals and 36 PATs, returns as the placekicker. Honeycutt is a good punter on top of everything else.

Defense is where the Hornets were terrific back in the fall of 2019. Amazing linebacker Jabril Norman graduated, but Zae Clay returns as an anchor on the defensive line.

Clay was the CCC’s Lineman of the Year in 2019 and had three sacks in the state championship game. .

Nick Hall — “318 pounds and none of it fat” — will be big factor in the middle of the defensive line. Also returning up front are All-CCC Kevin Hayes, Brandon Broadway and Dontaz Witherspoon.

Jalon Walker, one of the nation’s most highly recruited juniors, will be a force at outside linebacker.

“He loves football and we’re glad he’s on our team,” Hinson said. “He always stands out, and not just because of talent. He never stops working to get better.”

Jaden Gaither (6-2, 210) is a talented returning starter at inside linebacker.

“I’d like to have his body for two weeks,” Hinson said. “I’d walk around and never put a shirt on. He’s built like a Greek god.”

Amare Johnson is a sophomore inside linebacker who is on the rise.

Deuce Walker, Jalon’s younger brother, is a probable starter at cornerback as a freshman.

Jayden Gibson was good last year and has a chance to be special in the secondary.

Brian Brown, Zae Neal, Geter and Cook will also be factors on the back end of what might be a stone wall of a defense.

“We earned a lot of respect back for this program last season,” Hinson said. “We’ve got good kids and we’ve got the opportunity to be good again. We’re just happy to be playing. Let’s have some fun.”