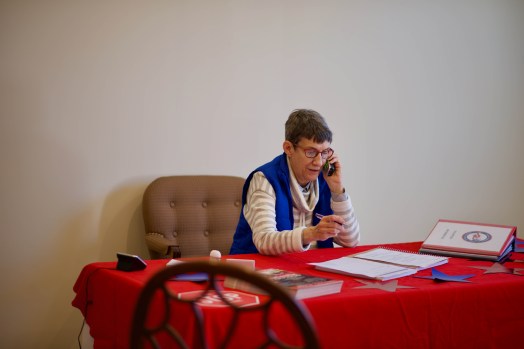 Carl Blankenship/Salisbury Post - Gloria Wilhelm on the phone with an interested parent at Faith Academy's office on Main Street. 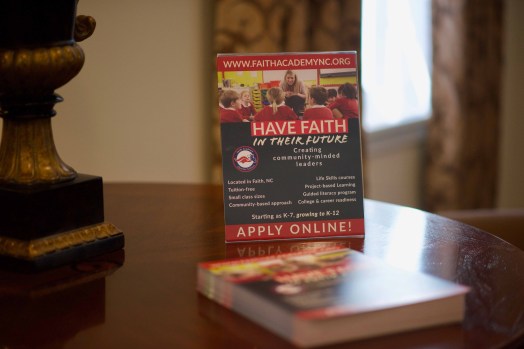 Carl Blankenship/Salisbury Post - The academy has information on applying on its website. There will be a lottery for available seats on March 13.

FAITH — Faith Academy has started spending money on the site that will host its temporary facility for next year.

The charter’s board chair George Wilhelm said the school is contracting with surveyors and engineers for work on the piece of land adjacent to Shiloh Reformed Church where it will install mobile units so it can begin classes this fall. Wilhelm said applications for the school have continued to roll in since they opened on Jan. 7. The deadline to apply for the coming school year is Sunday and an admission lottery will be held on March 13.

The school is planning to serve about 500 students grades K-7 its first year, adding a grade each year. In North Carolina, charter schools are state-funded public schools and do not charge tuition. The academy hopes to attract students from surrounding counties as well.

Discussion about starting a charter school in Faith began about two years when Rowan-Salisbury Schools restarted a discussion about closing Faith Elementary. Now, the district plans to close that school and Enochville Elementary in June. The possibility of Faith Elementary closing was a major point of discussion when the school’s board interviewed with the state’s Charter School Advisory Board for recommended approval last year.

Faith Academy’s board is made up of people who grew up in Rowan County and several who spent their careers with Rowan-Salisbury Schools.

Wilhelm is a former Rowan County sheriff. When he became interested in spearheading the project, he did not know much about what goes into opening a charter school. The entire board has been undergoing state training leading up to the opening of the school, including an eight-hour session on Exceptional Children on Wednesday.

These days, Wilhelm estimates he is putting in a full 40 hours each week working through the logistics of opening the school.

Sarah Hensley, the school’s head administrator, is in the process of hiring staff for the entire school starting from scratch. She started interviewing teachers last week.

“We’ve had a lot of interest,” Hensley said.

Hensley said a project of this scale requires some experience. In her career as an administrator with Rowan-Salisbury Schools, Hensley said she had similar tasks a handful of times, including when Salisbury City Schools merged with Rowan County Schools.

Hensley is in the school’s office on weekdays and works from home every night. She has been making the faculty handbook, training resources and maintains a binder of information related to the school published by media outlets.

Gloria Wilhelm is also a retired educator and former assistant principal at Faith Elementary. She also coordinates volunteers for the school. Six volunteers pitch in day-to-day to man the office and take some pressure off Hensley, but folks have been helping out other ways, too.

Gloria installed weather stripping on the office doors, and people have volunteered to take out the trash in the office and do other odd jobs as well.

George, who’s Gloria’s brother, said the charter is still interested in acquiring the Faith Elementary property in the future. The school plans to eventually have two facilities to house grade levels K-12.