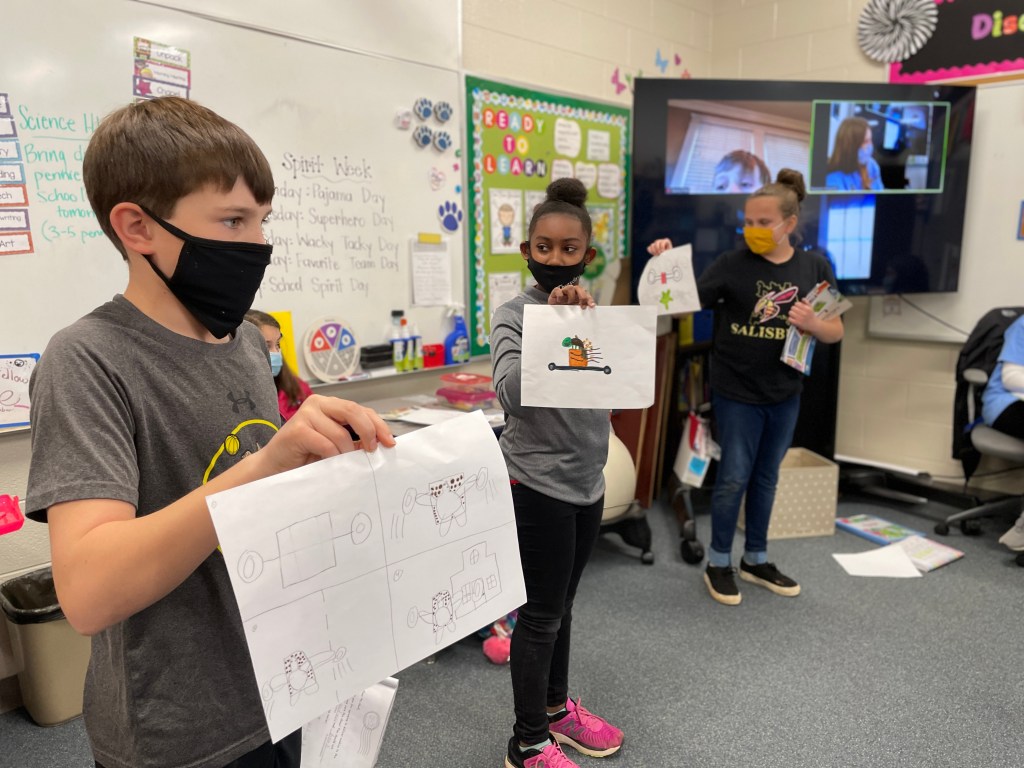 Photo submitted - Pitching is a key part of the invention process! Salisbury Academy fourth-graders honed their presentation skills while explaining their inventions and their usefulness.

SALISBURY – What is an invention that could solve day-to-day inconveniences or even larger world problems?

And why can it be helpful to get different outcomes than the ones we expect in our experiments? Fourth grade students at Salisbury Academy delved into these questions and more in their Eureka! invention immersion.

As part of their discovery process, students pretended that they were contestants on an exciting reality game show in danger of being canceled.

“The students stepped way outside of the box in this, and their ideas were fantastic,” Ellsworth said. “Even more exciting than that, though, was their collaboration and the way that they embraced any failed attempts as a chance to innovate.”

To further support their learning, students learned about famous inventors and inventions from around the world while paying close attention to the processes that different inventors use. Several students shared their reflections on the unit:

“I learned how failure helps us, how even though you might think you have the best design possible, you really might not. You have to ask yourself if there is something else that can be done with your invention,” fourth-grader Ashton Williams said.

“I liked inventing because we got to think of something that hasn’t been created in this world, from our own minds. It was challenging to think of how to build things and how they’d work,” student Emmaline Meyers said.

SALISBURY – Imagine seeing 5,000 redhead ducks on one 300-acre impoundment or a dozen black bears on a single ride through forest roads.

These sights are available to North Carolinians in what Mike Bryant calls hidden treasures: the 11 National Wildlife Refuges in the state.

They harbor a wide range of species, from the mountain bog turtle to the American oystercatcher, from the tundra swan to the endangered red wolf.

Bryant, regional representative of the National Wildlife Refuge Association for North and South Carolina, and Geoffrey Haskett, NWRA president, will speak March 4 at 7 p.m. on the organization as a whole and its specific conservation work in North Carolina.

The event is one of the Center for the Environment’s online presentations this spring. A conservation leader, Haskett worked for more than 30 years for the U.S. Fish and Wildlife Service before accepting his current position with the NWRA.

He served as the regional director in Alaska where he was responsible for management of almost 80 million acres of land within 16 National Wildlife Refuges. He also served as the U.S.-Russia Polar Bear Commissioner under both Presidents Barak Obama and George W. Bush.

Bryant retired in 2016 from the U.S. Fish and Wildlife Service after a 37-year career in refuge management. He supervised refuges in Virginia, Florida, Texas and North Carolina, where he managed six national wildlife refuges for 20 years.

Bryant is the president of a local non-profit organization called the Coastal Wildlife Refuge Society, a friends’ group that supports the nine refuges in eastern North Carolina, and he serves on the advisory board of Audubon NC. He volunteers on sea turtle patrol in the spring and summer, looking for turtle
nests on Pea Island.

The NWRA is an organization that works to protect and promote the nation’s refuges and their wildlife. The United States harbors more than 500 refuges, from the Arctic Circle National Refuge in Alaska to the Pee Dee National Wildlife Refuge in North Carolina. The wildlife refuge system spans more than 850 million acres.