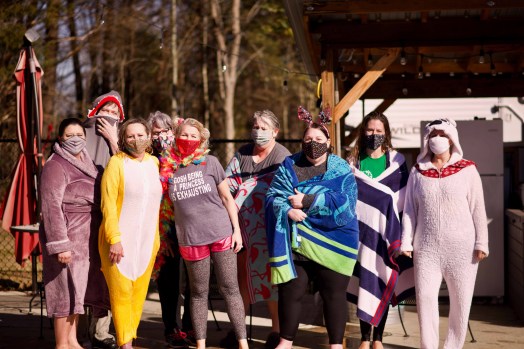 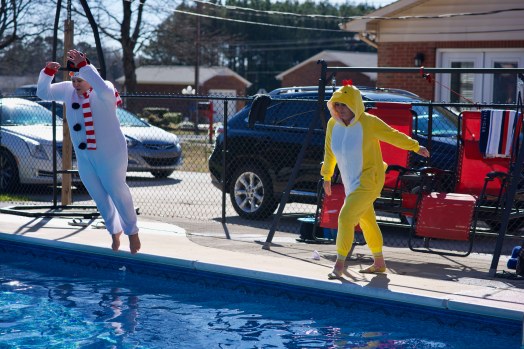 Carl Blankenship/Salisbury Post - EC Employees took turns taking a dip. The entire plunge was filmed to be submitted to the state Special Olympics as part of a compilation.

Rowan-Salisbury Schools’ Exceptional Children Department raised $1,310 for Special Olympics, and in lieu of the large-scale polar plunge for Special Olympics normally hosted at High Rock Lake, the department decided to take the plunge together, film it and submit it as an entry for a statewide compilation.

The new “plunge in place” model has become the norm because the COVID-19 has put a damper on mass events. The folks who took the plunge into a residential pool on Tuesday did it with social distancing.

The weather cooperated, too. It has been unseasonably warm this week, but the water was still cold. The department fundraises for local Special Olympics each year.

The state organization has raised $91,000 of its $150,000 goal for the campaign so far and people can form fundraising teams.

EC program specialist Suzette Pritchard is the liaison between Special Olympics and RSS. She said the video compilation of all the plunges will be published on Saturday.

Special Olympics as a whole looks different this year as well. Normally, RSS would host track and field events at West Rowan High School, but this year there is a curriculum athletes can complete to get incentives and rewards.

“It’s sunny, it’s 65, yes I’m very happy about that,” Pritchard said. “I’m never happy about jumping in cold water but I do it because I love our kids.”

The next event on the agenda for the department is Pi Day to celebrate student math growth. Mitcham, who used to teach math, will take some pies to the face.