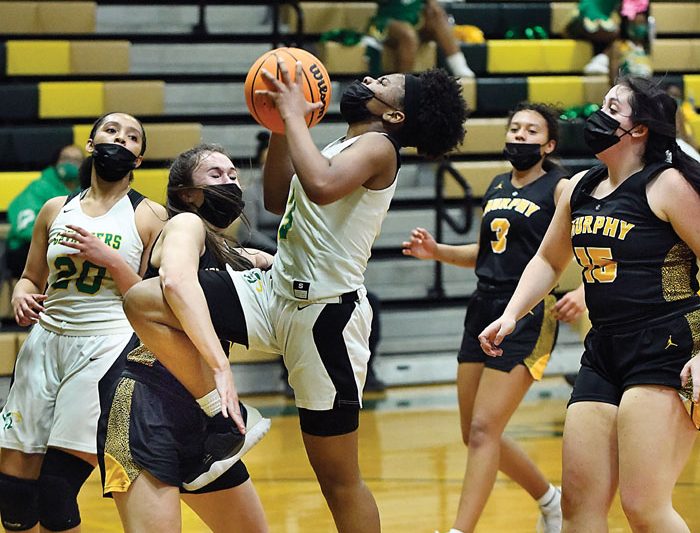 Two minutes into the game, North led 1-0, but once Murphy finally broke the ice and was able to apply its own defensive pressure, it was an avalanche for the visiting Bulldogs.

“They hard-manned us at the outset,”  Murphy coach Ray Gutierrez said. “But teams have come at us like that before. Once we got that first bucket, we were OK.  North Rowan is very young, three freshmen starters and a sophomore guard, and we felt like we were athletic enough to pressure them.”

The Bulldogs, who went 30-0 last season, built a 40-point lead early in the third quarter to trigger a running clock. They cleared the bench and ended the Cavaliers’ season, 66-35.

North couldn’t get started offensively. Bailee Goodlett scored on a runner with just seconds left in the first quarter for North’s first field goal. That made it 20-5.

Murphy scored a relentless 52 points before halftime, mostly on the run off North turnovers or long-range misses.

Murphy star Torin Rogers, a 6-foot-1 forward who handled the ball, drove it and rebounded it, had all 23 of her points before halftime.

She got 16 in a devastating second quarter in which the Bulldogs beat the Cavaliers down the floor and piled up 32 points.

“Torin is a junior with 15 or 20 D-I offers,” Gutierrez said. “She’s a dynamic and skilled player. Still undecided about schools, but she’s got some time.”

When Murphy scored the first seven points of the second half to lead 59-19, Gutierrez graciously pulled his starters out.

North enjoyed a 9-0 run at that point, including a 3-pointer by Cannie.

The trip for Murphy from the mountains was between four and five hours, but the 13th-seeded Bulldogs (13-2) showed few signs of fatigue.

“We had a great run in the playoffs last season and made long trips like this,” Gutierrez said. “Our girls have been here before. They know the playoffs are a grind. We’ll have another trip to get ready for on Thursday.”

Senior Makiya McDaniel came off the bench and got a bucket and several blocks.

Murphy got 13 points from senior Kaiya Pickens and 10 from freshman Sarah Pullium.

“They’re a good squad with a promising future,” Gutierrez said. “We watched film of North Rowan against West Stokes. We saw how hard they competed, and it was scary.”