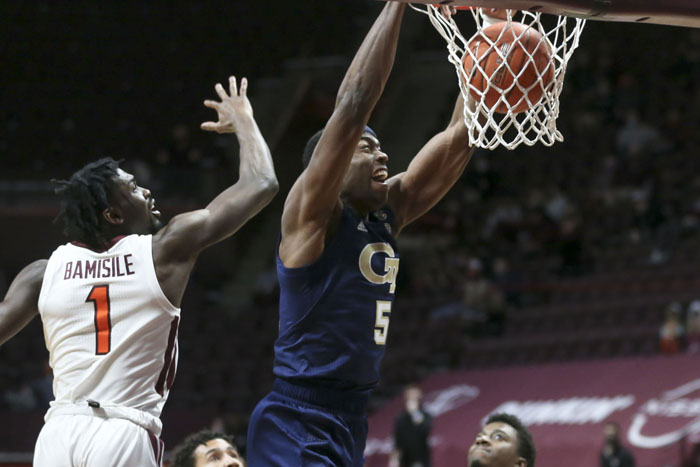 Georgia Tech’s Moses Wright slams home two of his 26 points in the victory over Virginia Tech on Tuesday night. Photo courtesy of ACC

BLACKSBURG, Va. (AP) — Moses Wright scored 17 of his 26 points in the second half, helping Georgia Tech pull away from No. 16 Virginia Tech for a 69-53 victory Tuesday night.

The Yellow Jackets grabbed control with a 12-0 run in the second half. Wright scored seven points during the decisive stretch on three dunks and a free throw.

Nahiem Alleyne had 12 points for the Hokies.

The veteran Yellow Jackets are pushing for a spot in the NCAA Tournament. It was the Yellow Jackets’ fourth win over a ranked team this season. With plenty of experience and talented guard play, they are a team to watch in the final two weeks of the regular season.

Virginia Tech played for the first time since Feb. 6 after a pause because of COVID-19 protocols. The Hokies looked a little rusty, struggling against a 1-3-1 zone, missing open shots and turning the ball over 16 times. They host Wake Forest on Saturday.

EAST LANSING, Mich. (AP) — Aaron Henry scored 20 points and Joshua Langford had 15 points and a career-high 16 rebounds to lead the Spartans past the Fighting Illini.

The Spartans (12-9, 6-9 Big Ten) earned a desperately needed quality win to bolster their chances of playing in 23 straight NCAA Tournaments.

The Fighting Illini (16-6, 12-4) had won a Big Ten-best seven straight games, putting them in contention for a No. 1 seed. Trent Frazier scored 22 points for Illinois, whose star players weren’t as productive as usual against a suddenly stingy defense.

Illinois guard Ayo Dosunmu, coming off his second triple-double in a 94-63 win over Minnesota, had 17 points on 6-of-18 shooting.

Rocket Watts and Joey Hauser each scored 13 points for the Spartans, who were in control for much of the game with balanced offense and aggressive defense.

FORT WORTH, Texas (AP) — Taz Sherman scored 23 points, Derek Culver had 18 points and 14 rebounds, and the Mountaineers continued solid play on the road with a victory over TCU. Miles McBride added 11 points for West Virginia (16-6, 9-4 Big 12).

The Cardinals (12-5, 7-4 Atlantic Coast Conference) were playing at home for the first time since Feb. 1, and did so without second-leading scorer David Johnson.

Michael Almonacy scored a career-high 24 points and had six rebounds for the Mountaineers (12-10, 6-7), who have now lost five consecutive games.

Heels aren’t only ones pursuing nonconference games to boost…