High school basketball: Carson girls have no trouble in first round 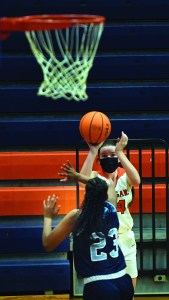 CHINA GROVE — Carson’s girls basketball team shot poorly on Tuesday in the first round of the 3A state playoffs … and won by 36.

That says a lot about the third-seeded Cougars, who mauled 14th-seeded Kings Mountain 69-33.

“We didn’t shoot it well at all, only made five 3-pointers,” Carson head cocah Brooke Stouder said. “But we did everything else solid. It’s a good sign that we can win a playoff game even when we aren’t shooting well.”

Carleigh Perry is Carson’s No. 5 scorer on the season.. That also says something about the Cougars because the senior forward is one heck of a player. She had 16 points, eight rebounds and five steals as the Cougars improved to 15-0.

Hannah Isley returned from COVID issues and had 13 points and five steals. She missed the three previous three games. Lani Isley returned along with her sister. She didn’t score, but she had eight rebounds.

Mary Spry got her 16 points while taking only nine shots and added four steals.

Colbie Perry and Ellie Wilhelm were shooters who didn’t have their best nights, making only one 3-pointer each, but they helped out with nine points apiece.

Carson wanted a quick start and got it.

“With the playoff bracket cut in half, this was basically like starting with the second round.

“That’s exactly what we talked about,” Stouder said. “Everyone in this year’s playoffs is good. We wanted to jump on them quick and not let them stay in it and we did. We had good defensive pressure and knocked down some shots early.”

It was just about over after a quarter. Carson was up 23-2.

Standout guard Saniya Wilson, who averages 24.4 points per game, didn’t start for Kings Mountain (10-5) because of some back tightness, but jumped off the bench pretty early.

“She’s very good and can score in bunches,” Stouder said. “But we did  good job of staying in front of her and identifying her as their scorer.”

Wilson finished with 23 of  the Mountaineers’ 33 points but only had six in the first half. Carson’s lead was a secure 35-16 at halftime.

“We had a lull in the second quarter, but got back to playing well in the third quarter,” Stouder said. “We created some turnovers and got out in transition, and that’s when we’re at our best.”

Cuthbertson, from Union County, is next for the Cougars at home on Thursday. Cuthbertson (15-1) routed Crest 63-22 in the first round.