Heels aren’t only ones pursuing nonconference games to boost schedule 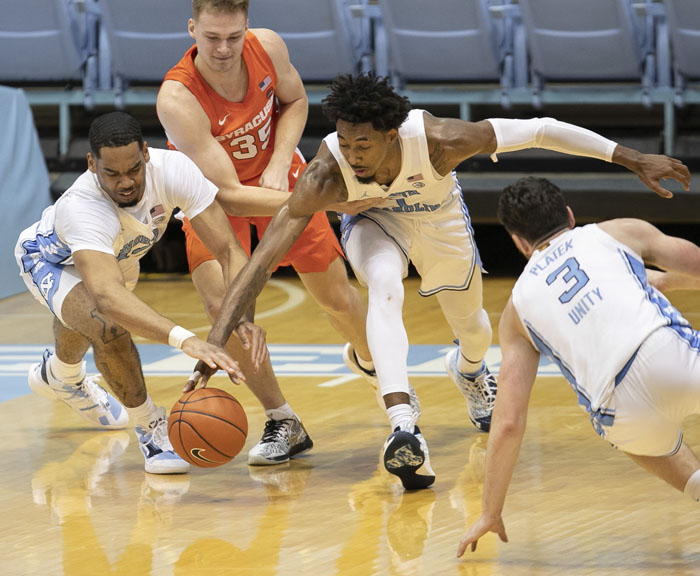 File photo courtesy of ACC -- UNC’s Garrison Brooks and Leaky Black, right, have seen plenty of ACC foes like Syracuse, but they’re still trying to add games to reach the limit of 27 for the season.

North Carolina hasn’t been sitting around waiting to see if there will be time to reschedule its postponed Atlantic Coast Conference games.

The Tar Heels added — and won — a nonconference game last week against Northeastern, and they have another Wednesday against Marquette. Coach Roy Williams has been open about wanting to play as many games as possible to aid the development of a freshman-heavy team still working to solidify its NCAA Tournament hopes.

“If you lose a game, we’re going to try to do everything we can to get the ACC games rescheduled. And if that doesn’t work, then there’s a lot of teams around the country that are like us, that don’t have as many games. So I think it’s good for kids to play.”

The Tar Heels (14-7, 8-5 ACC) had postponed home games against Clemson (Jan. 9) and No. 16 Virginia Tech (Feb. 16), along with Tuesday’s road game at Boston College, amid COVID-19 issues involving their opponents. There was also a last-minute postponement of the Feb. 8 home game against Miami, which followed the emergence of social media video showing Tar Heels players Armando Bacot and Day’Ron Sharpe mingling with other people celebrating a win against Duke and no one wearing a mask.

The Tar Heels aren’t alone in pursuing nonconference games. No. 12 Houston announced Sunday it would host Western Kentucky from Conference USA on Thursday, and it also added a game against NAIA program Our Lady of the Lake earlier this month (a 112-46 win).

But the Tar Heels have played more road games (nine) than home (eight), including just five of 13 league games at home. UNC, which also played four neutral-court games, is unbeaten at home.

“It helps us learn more about ourselves and things we’ve got to work on,” freshman guard Kerwin Walton said of adding games. “And I think we all can agree, every player in the nation could agree, that playing is way better than practicing.”

Last Wednesday’s 82-62 win against Northeastern from the Colonial Athletic Association filled a midweek opening for the Tar Heels following the Virginia Tech postponement. The BC postponement created another midweek opening ultimately filled by Marquette. It marks the first time in 32 years that UNC has played two regular-season nonconference games in February or March.

The timing worked, too, for the Golden Eagles (10-12, 6-10 Big East), who beat Butler last Wednesday but weren’t due to play again until visiting Connecticut on Saturday. Like Williams, Marquette coach Steve Wojciechowski — who played and worked as an assistant coach against the Tar Heels while at rival Duke — is trying to play as many games as possible and put out feelers to see what options might be available.

The Tar Heels dive back into ACC play on Saturday by hosting No. 11 Florida State, though Williams said UNC is still having “preliminary” conversations about potentially filling another opening next week.

Asked whether that included any potential rescheduled ACC games, Williams quipped: “We’re having discussions with anybody and everybody, and three different teams in the NBA as well.”