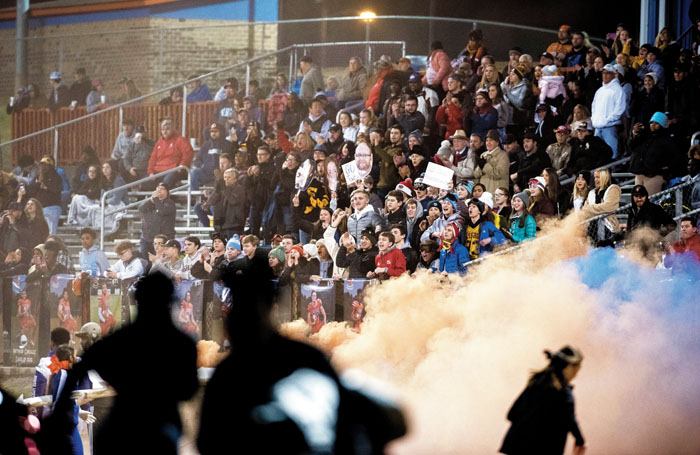 As the state’s COVID-19 metrics have improved and stabilized, Cooper on Wednesday issued Executive Order 195, which eases some restrictions outlined in the stay-at-home order. One of those changes will allow outdoor sporting venues to increase their current 100-person attendance limit to 30% of a venue’s maximum capacity.

South Rowan High School Coach Daniel Yow said he would like to have more fans able to attend games safely, but he’s just excited to be able to play after a long delay in starting the season. South Rowan’s football stadium can hold roughly 3,800 spectators. So, the new executive order will allow the stadium to host close to 1,200 fans.

In a tweet posted Wednesday night, South Rowan announced its football game against nearby rival Carson High would be moved to Saturday, with 750 tickets available. Yow said that game is “the biggest game of the season” in terms of attendance.

Salisbury High School and West Rowan High School, however, may not get to take advantage of the change this week unless a last-minute decision is made to reschedule their football game. With the threat of impending rain up to a half-inch on Friday, a game scheduled for Friday was moved to Thursday. The new executive order doesn’t take effect until Friday at 5 p.m.

That 24-hour difference results in a loss of more than $7,000 from ticket sales, said Salisbury High Coach Brian Hinson. Because of that loss and the inability to play on Friday, Hinson told the Post he sent an email to the North Carolina High School Athletic Association requesting that it lobbies the governor to allow the order to go into effect on Thursday.

West Rowan High School Louis Kraft concurred and said it was unfortunate that the announcement wasn’t made before today.

But it’s a step in the right direction, Hinson added.

“We’ve got to be thankful for whatever we can get right now,” Hinson said. “Not every year do you have to deal with a pandemic. The city, county and state are trying to do the best thing for the kids.”

Like South Rowan, Salisbury High School’s football stadium can host around 1,300 fans with the expanded 30% capacity limit. But Hinson said the school’s boys and girls soccer teams and the football team all share the same field, so the decision to move the game was to take care of the field.

Yow said that though 30% capacity is better than a 100-person attendance limit, many schools across the state will still run red in their budgets, especially since “football is the money-making game.”

Sen. Carl Ford, R-33, said Cooper’s announcement is “a step in the right direction but not enough.” Ford is currently cosponsoring Senate Bill 116, which would allow public and private K-12 schools to host 40% of the outdoor sporting facility’s approved capacity limit. For any venues that don’t have a stated fire capacity, the bill would allow no more than seven spectators for every 1,000 square feet.

The bill also states that any spectators who bring their own seats to the venue would be not be included in the capacity limit as long as they socially distance themselves from others. Additionally, “spectators” don’t include athletes, school employees, staff or entertainers.

The bill currently sits in the Committee on Rules and Operations of the Senate, and was filed by Sens. Todd Johnson, R-35, Vickie Sawyer, R-34, and Danny Earl Britt Jr., R-13.

A similar bill, House Bill 128, was filed Tuesday and is cosponsored by both Reps. Wayne Sasser, a Stanly County Republican whose district includes southern Rowan, and Julia Howard, a Davie County Republican who represents much of western Rowan. That bill would allow 50% capacity and no less than 25% for both indoor and outdoor sporting events at public and private K-12 schools, community colleges and branches of the University of North Carolina.

There are other bills making their way through the General Assembly, but they are local bills restricted to only a handful of counties.

Yow said he’s all for such bills.

“The more, the merrier at this point,” he said.