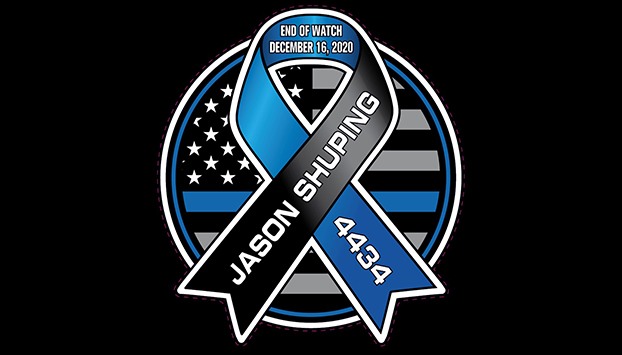 This image will be on a magnet affixed to marked Concord Police cars.

CONCORD — Eastern Rowan County native Jason Shuping will be memorialized in a fallen officer memorial and through other steps being taken by the city.

The Concord City Council has approved a $100,000 budget amendment to create the memorial after taking other steps to honor the life of the fallen officer.

Shuping was killed in December during a shootout off of Bruton Smith Boulevard, near I-85 and Concord Mills. He was approaching a suspect in a carjacking incident with another officer, Kaleb Robinson, when he was fatally shot. Robinson was injured in the incident.

Shuping grew up in eastern Rowan County area and graduated from East Rowan High School. He competed in throwing events on the track team, where he met future wife Haylee. He headed to the University of North Carolina at Pembroke, where he also was on the track team, after high school. At the time of his death, Shuping lived in the Faith area with his wife.

The city of Concord said the fallen officer memorial will “offer a place for current and former law enforcement, their families, and the community to remember, reflect upon, and honor those who have sacrificed their lives in service to their community.” It will be placed outside of the police department’s headquarters and feature a bronze statue of an officer surrounded by columns with blue lighting and a plaque engraved with Shuping’s likeness, name and end-of-watch date.

His unit, No. 4434, has been officially retired and will not be used again by the Concord Police Department.

The city said it has taken other steps to remember Shuping’s life that include:

• Filing state and federal paperwork to establish a nonprofit called the Concord Police Foundation, which will provide support such as financial assistance for officers seriously injured or killed in the line of duty.

• Renaming the bridge over I-85 at Burton Smith Boulevard after Shuping.

• Approving travel for several employees to attend National Police Week services in Washington, D.C. At the event, a candlelight vigil and national roll call of names will include Shuping.

• Beginning next month, all marked Concord Police Department vehicles will display a magnet with a thin blue line flag and a black and blue ribbon. The magnets will remain on the cars until Dec. 16 and be reaffixed to cars every year during National Police Week.

RSS board votes to send elementary students to in-person…