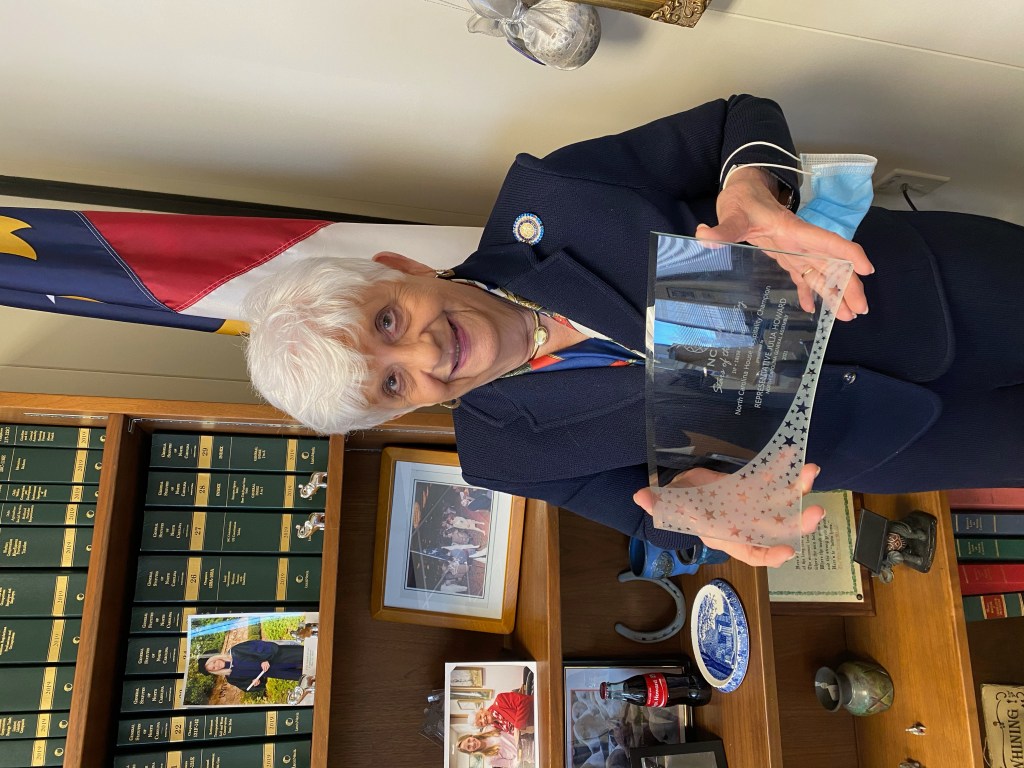 Rep. Julia Howard, a Republican who represents House District 77, was awarded last week the 2021 Stars of the Industry award for being a "hospitality champion." The award comes from the North Carolina Restaurant and Lodging Association. — Courtesy of Julia Howard

Longtime Republican lawmaker Rep. Julia Howard last week received a 2021 Stars of the Industry Award for being a “hospitality champion” for the North Carolina Restaurant and Lodging Association.

The “hospitality champion” award honors a state legislator who has made the most legislative headway for the hospitality industry.

The Stars of the Industry awards ceremony, held on Feb. 16, allowed North Carolina’s hospitality community a chance to reflect and honor the selfless contributions and stories of inspiration from within the industry, the NCRLA said in a statement. Award recipients were selected based on their service, leadership, innovation and dedication to the restaurant and lodging industries.

Sen. Chuck Edwards, R-48, also received the “hospitality champion” award for his support of the state’s business growth and needs, the NCRLA said.

“Even in these extraordinary times, the hospitality industry is brimming with outstanding leaders who are raising the bar for excellence in performance, service and commitment to the industry,” said NCRLA President and CEO Lynn Minges. “We are proud to recognize the hardworking men and women that continue to give back to their communities every day, even amid the challenges the industry faces today.”

Howard told the Post she was honored and thankful to receive the award, though it came as a surprise. She attributes the award to her work as senior chairman of the House Finance Committee, which worked last session to ease the brunt of the pandemic’s impact on the restaurant and hospitality sector.

Howard highlighted measures related to unemployment benefits that helped that industry, including one that allowed first quarter unemployment taxes to be forgiven and another that allows the employer to file for benefits on behalf of the employee to simplify and expedite the process. And as an additional help, the base tax rate for unemployment insurance will remain at 1.9% this year rather than the rate of 2.4% that was expected before the pandemic. Howard said every employer, except brand new entities, have a base tax rate for unemployment benefits, which can depend on how many claims are filed.

WASHINGTON — Earlier this month, Rep. Ted Budd, R-13, introduced a bill he says would protect businesses recovering from COVID-19 as they reopen and another that would prioritize skills in addition to college degrees in the hiring process.

The first piece of legislation would provide a legal liability shield for businesses and certain medical facilities from lawsuits.

“Congress should be doing everything in our power to make sure that small businesses are able to reopen as quickly as possible,” Budd said in a statement. “My bill helps achieve that goal by preventing businesses and certain medical facilities from being hit with frivolous legal claims relating to COVID-19. Standing up for our country’s job creators and workers has never been more important.”

Throughout the COVID-19 pandemic, no business or medical facility would be liable for damages arising from claims that an individual contracted COVID-19 at the business or medical facility as long as the establishment was operating in a fashion consistent with any applicable state or federal guidelines or requirements on reopening and was using Centers for Disease Control and Prevention measures to mitigate the potential spread of the virus.

The requirements in the bill would not apply to a business or medical facility that a court has determined to have acted grossly negligent.

Another bill Budd filed is called the Federal Skills Act, which would modernize the federal hiring process to prioritize skills instead of university and college degrees exclusively. The bill calls on the director of the Office of Personnel Management and agency heads to review and revise all job classification and qualification standards for positions within the federal competitive service to ensure candidates will not be assessed solely on educational background.

Additionally, job listings would need to be based on specific skills and competencies, but agencies could implement a minimum educational requirement if an education is legally required for the position.

“The federal government should be opening its doors to candidates with the skills required for the job, not simply an expensive college degree,” Budd said. “My bill is about providing opportunity for a more diverse cross-section of Americans to join the civil service.”

RALEIGH — North Carolina Republicans are claiming “another win” for a years-long fight to implement a voter ID law after the U.S. 4th Circuit Court of Appeals decided not to review a three-judge panel’s ruling upholding the 2018 law.

On Dec. 2, the three-judge panel reversed a lower court’s decision to prevent the implementation of a 2018 voter ID law that passed with support from a majority of voters as a ballot referendum. The ruling disagreed with a district court’s decision stating the North Carolina photo ID law would likely have a disproportionate impact on Black voters who “could be deterred from voting or registering to vote because they lack, or believe they lack, acceptable identification and remain confused by or uninformed” about the law.

The panel held that “the district court’s opinion devotes little analysis” to its ruling, and that “we reverse because of the fundamental legal errors that permeate the opinion.” The additional review of the case, which was denied, would have involved all 15 members of the court — an en banc review.

“This is another win for North Carolina voters in federal court, and our commonsense voter ID requirement must be implemented for the next election cycle in our state,” said House Speaker Rep. Tim Moore, R-111, in a statement earlier this month. “As an original sponsor of North Carolina’s voter ID constitutional amendment in 2018, I am working with my colleagues in General Assembly leadership to protect this vital election integrity measure that the people approved in a ballot referendum. As the 2020 elections demonstrated, voting in person with a photo ID is the best way to ensure the integrity of our elections.”

The law applies to both absentee and in-person voting. Currently, a state court injunction on the voter ID law remains in place despite the federal order being lifted, but Moore anticipates further litigation in both forums this spring. The federal court case was filed by the North Carolina chapter of the NAACP, while the ongoing state case was filed by the Southern Coalition for Social Justice, a nonpartisan organization that advocates on behalf of the historically marginalized.

The SCSJ is currently challenging the law in the case of Holmes v. Moore, with a trial date set for April 21.

If not ultimately overturned, the law could go into effect for the 2022 midterm elections.

Ask Us: Why is Rowan EMS no longer transporting…