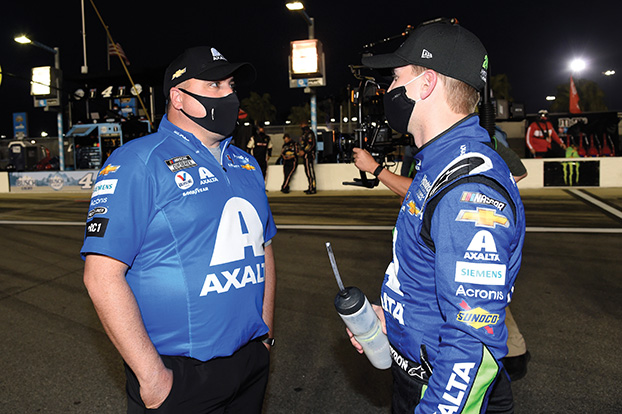 Rudy Fugle and William Byron have maintained a strong connection since 2016 when they won a series-best seven races in the NASCAR Truck Series. Photo submitted by Nigel Kinrade Photography.

SALISBURY — Sitting at a table in Buffalo Wild Wings in Huntersville in 2016, Rudy Fugle and William Byron talked racing.

“We were supposed to kind of go out on a date with our driver and figure out which one we thought we were going to line up with best and get along with best and have the most success,” Fugle said.

A wide-eyed Byron spent the meal peppering Fugle with questions. Over chicken wings and fries, the two connected.

“We met and I didn’t need to go any further because I felt a connection with him,” Byron said. “The racing knowledge, just his approach to everything was so spot on in terms of what I was looking for. He and I clicked right off the bat.”

The duo went on to win a series-best seven races together in 2016 and were only stopped from competing for a championship by an untimely engine failure. The next year, Byron moved on to the Xfinity Series and eventually made it to the Cup Series as the No. 24 driver for Hendrick Motorsports. Fugle, in the meantime, continued to win at an unprecedented rate in the Truck Series.

Fugle, who lives in Rowan County with his wife and four children, and Byron remained in touch over the years. When Byron needed a new crew chief in the fall of 2020, Hendrick turned to a familiar face.

Once again, Fugle and Byron sat down together at a restaurant to talk racing. This time it was a TGI Fridays and it felt less like a first date and more like a reunion of longtime friends.

“It was sort of the same meeting, but it was flip-flopped because I was wanting to know how things would go and how we’d fit and what my role would be and all those things,” Fugle said. “Five years ago, it was the other way around.”

Fugle was hired for the job, reaching the pinnacle of racing at just 36 years old. 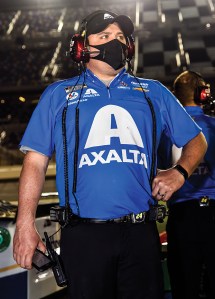 It was a goal he’d been shooting for since he was a kid growing up in Livonia, New York, a small town south of Rochester where his family owns a salvage yard.

“I grew up messing around with cars and helping my father and my family out,” Fugle said.

His interest in NASCAR was linked to his love of tinkering with cars, but it was also sparked when he saw people like him have success on a grand stage.

“Seeing what you think are regular-type people, mechanical people that are not much different than the people you’re growing up around, my uncles and my dad and a lot of your friends that like to work on cars, that are getting to do something pretty cool on TV in race cars and travel all over the country and compete,” Fugle said. “I always liked racing.”

As a teenager, Fugle even tried his hand behind the wheel at a few dirt tracks. But it was working on the cars themselves and figuring out how to make a very heavy piece of metal go as fast as possible that Fugle loved.

After graduating from high school, Fugle moved to Charlotte to be as close to NASCAR as possible. He earned a degree in mechanical engineering from the University of North Carolina at Charlotte and got his start in racing as an engineer at Robert Yates racing in 2006. He continued to move up the ladder and was hired in 2013 as a crew chief for Kyle Busch Motorsports, where he spent the next eight seasons molding novice drivers into winners.

“The biggest thing is he has the right amount of patience for younger drivers,” Byron said. “He allowed me to make mistakes, learn and go, but also to push me along at the same time.”

Fugle said his secret to coaching rookie drivers was to make them feel at ease and confident heading into each race.

“All these guys were going to the track for the first time and doing new things, and that’s hard enough as it is, let alone trying to compete at a high level and win races in NASCAR.” Fugle said. “I always thought I did a good job of prepping those drivers and doing those things and presenting them with everything they needed to be comfortable.”

Over the course of eight seasons in the NASCAR Truck Series, Fugle captured 28 first-place finishes and won five owner championships. He won races with six different drivers, several of them rookie competitors like Byron was in 2016.

When Fugle and Byron rekindled their racing relationship in 2020, Fugle was more weathered and Byron was more seasoned. Their goals for racing, however, hadn’t changed: drive fast and win.

The duo picked up right where they left off when Byron secured a starting spot on the front row of the Daytona 500 with an impressive pole-qualifying session. However, after crashing during preliminaries on the Thursday before the race, Bryon lost his No. 2 starting spot and was forced to go to a backup car.

Before the green flag was waved to start the Daytona 500 last Sunday, Fugle took a moment to appreciate how far he’d come in the sport he grew up wanting to work in.

“There are definitely some moments when you’re getting ready for the race to start and there’s excitement and there’s 40 of the best race car drivers in the world sitting in their race cars right in front of you and you think about how exciting it is to break through and have a chance to crew chief at the top level at an amazing place like Hendrick Motorsports, iconic 24 car, great sponsor like Axalta,” Fugle said. “There’s not many opportunities like this for many people, so I’m definitely blessed.”

The team’s first major race together didn’t go exactly as planned, with Byron’s chance at victory slipping away in an early-lap crash. But it wasn’t all bad for team 24, Fugle said.

“There were some downs in the 500, but overall we felt good,” Fugle said. “We had good speed. The cars were fast and we communicated well.”

Fugle and Byron will get their crack at redemption today during the O’Reilly Auto Parts 253 at Daytona. It’s one of six road courses that appears on this year’s Cup Series schedule, a departure from the typical schedule that has featured only two. As opposed to the typical oval that has become a staple in NASCAR racing, road races typically feature more turns and less laps.

“It sets you up to have to work hard from a team standpoint to get the cars good and the driver has to put a lot of effort into getting to know the racetrack and being a good road racer,” Fugle said. “I’m definitely looking forward to that challenge of more road races this year.”

Fugle will spend most of his time at the track or on the road over the next year, but when he does have quiet moments, he plans on spending them with his family in the outdoors. They love to hike or walk in parks across the state, Fugle said, including Dan Nicholas in Rowan County.

The O’Reilly Auto Parts 253 at Daytona will start at 3 p.m. this afternoon.