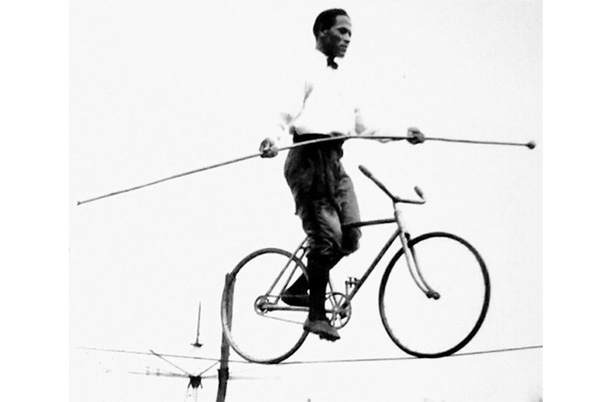 Rome Harris was a talented wirewalker who eventually owned and operated his own traveling amusement ride company for several decades in the mid-1900s. Photo submitted.

SALISBURY — Frederick Mitchell didn’t have much to do during the winter days he spent with his grandfather in Dillon, South Carolina, but even then he knew he didn’t want to spend his time in the barn.

A stone’s throw from the home where his grandparents spent the coldest months of the year, the wooden barn was where Rome Harris worked from sun up until sun down servicing his amusement rides.

With no neighborhood kids nearby, Mitchell found himself hanging out with his grandparents’ dog, Spot, when his parents dropped him off for a few weeks and went back home to Salisbury.

“Spot was my best friend and my only friend,” Mitchell said. “My parents would drop me off and say, ‘We love you. See you.’ I would say, ‘Spot, it’s me and you again.’”

If Mitchell and Spot wandered into the barn, or even close to it, Rome would call out to him.

“When I would go out there to the barn, he put me to work,” said Frederick Mitchell, known as “Butch” by friends and family. “So me and Spot stayed out of that barn.”

When the weather warmed and spring turned into summer, Rome would haul his freshly-painted, well-maintained rides across the border into southeastern North Carolina.

For about four decades in the mid-1900s, Rome’s traveling amusement show went from town to town along the coast, providing families with days of fun. Mobile amusement companies were common at the time, but not many were owned by a Black man like Rome Harris.

“Even today, it’s very unusual for an African American to own a carnival,” said William Harris, Rome’s grandson who grew up in Salisbury but lives in Wilmington.

Helping Rome make the circuit every summer were members of his family, including his children and grandchildren, Frederick and William, both of whom grew up in Salisbury.

In his caravan, Rome, who had blue eyes and was fair complected, kept about eight rides. That included a ferris wheel, swings, a Tilt-A-Whirl and small trains. William, known as “Billy” to friends and family, remembers the sweat-soaked days he spent under the summer sun putting those rides up and taking them back down.

“Set up and tear down was the most strenuous time of the work week,” William said. “When you’re setting up one location and then two weeks later you tear down to move to another location. Normally, you started working at seven in the morning and worked a 14-hour day in the heat. That was strenuous.”

Though the exact recollection of Rome’s early life is lost to time, he was likely born around 1896 in Salisbury. William said Rome spent a lot of his early years in machine shops around town before going off to North Carolina Agricultural and Technical State University. He started working toward a degree in mechanical engineering, but his progress may have been interrupted when he was called to serve in World War I. 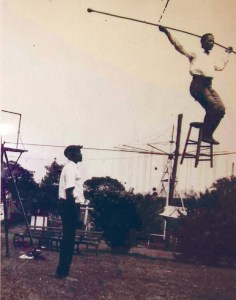 Rome Harris walks on a wire in front of spectator. Photo submitted.

That period of Rome’s life is shrouded in mystery, but William said when Rome returned to North Carolina he learned how to walk across a tightrope and became a member of a carnival run by Mike Mansfield, which William believes performed in Texas for some time.

In 1935, Rome started a mobile amusement company of his own that he called Excelsior Entertainment. He continued to add to the traveling show’s offerings, buying new rides and using his engineering background and welding skills to build several on his own.

“I think three of the kiddie rides he actually built himself in the early 1950s,” said William, who is now retired after working for the Army Corps of Engineers for several decades.

Eventually, Rome renamed the company Rome’s Rides, cut out carnival games and stopped wire walking as frequently. William said that he was told that Rome didn’t want his amusement company to be considered a carnival due to the connotation.

“If you go back to the ’40s and ’50s, carnivals didn’t have the best reputation in the world,” William said. “But my granddad used to always call his show a ‘Sunday Show,’ because it didn’t have any games around it when I was around it.”

Rome focused his attention on his rides and a concession stand, which was run by William’s mother. The traveling show was a family affair for Rome, whose wife Bridgette helped him run the company. 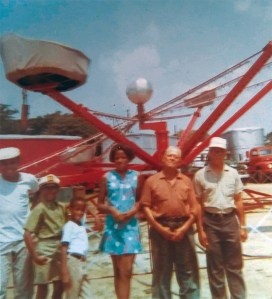 “At one point in time, all of his children worked with him and they had six children,” William said.

William spent almost every summer of his youth working with his grandfather, operating rides and helping with setup and take down. Mitchell spent several summers working at his grandfather’s business as well. At just five years old, Rome even trusted Mitchell to operate a ride on his own.

“It was a fun thing to me because I used to run the kiddie rides,” Mitchell said. “They put me on the little train. (The customers) gave me the ticket, put the little kids on the train and I let it run for two minutes.”

In between rides, Mitchell would sneak off to the concession stand where he was paid for his work in popcorn.

“It didn’t feel like a job because I was eating popcorn and laughing,” Mitchell said.

Even though traveling around with the amusement rides was fun, hard work was always involved. And Rome was a dedicated and focused worker.

Mitchell said that Rome never took a day off.

“He was really business minded,” Mitchell said. “As far as us going fishing and hunting or going bowling, he didn’t do stuff like that. He strictly kept his mind on his business.” 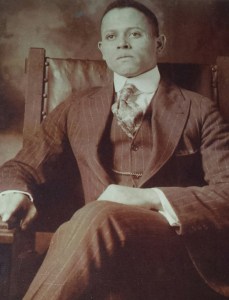 A picture of a young Rome Harris possibly taken in the 1920s. Photo submitted.

In the summer, when Rome’s Rides was at its peak, Mitchell remembers Rome waking up before everyone else to ensure that the rides were operating properly. In the offseason, Mitchell said, Rome woke up just as early and went out to his barn to prepare the rides for the next summer.

Rome’s Rides typically set up shop in an empty field that would fill with hundreds of customers once the sun set. The rides were welcoming to people of all races, but many of the locations where Rome’s Rides visited were primarily Black communities, William said.

Wilmington, Kinston and Fayetteville were all popular stops for Rome’s Rides. Wilson was too, until around 1960 when the city passed an ordinance outlawing putting trailers on property that was zoned as a mobile home park.

Rome and his crew usually slept in trailers parked in the empty fields next to the rides, but the new law wouldn’t allow it. It would’ve been easy for Rome to park his trailers in a mobile park somewhere else in town, except he and his family were Black.

After working into his 70s, Rome retired from the amusement industry in 1970 and sold his rides to a man named E.J. Langley in Wilson. Although Rome never took the show back to his hometown of Salisbury, Langley took some of Rome’s rides there just years after Rome sold them to him.

Rome eventually returned to Salisbury to undergo treatment for stomach cancer in early 1975. His stay was short. Rome succumbed to the disease just a few months later in March, seven years after his first wife Bridgette died.

William said he often thinks back to the summers he spent on the road with his grandfather and many of their family members. He still keeps up with the traveling entertainment industry and has long been a subscriber to Carnival Magazine, based in Salisbury.

“The older I get, the more I think about it,” William said. “Sometimes, I wish that’s what I was doing now.”

William said that he looks back on what his grandfather was able to accomplish with pride.