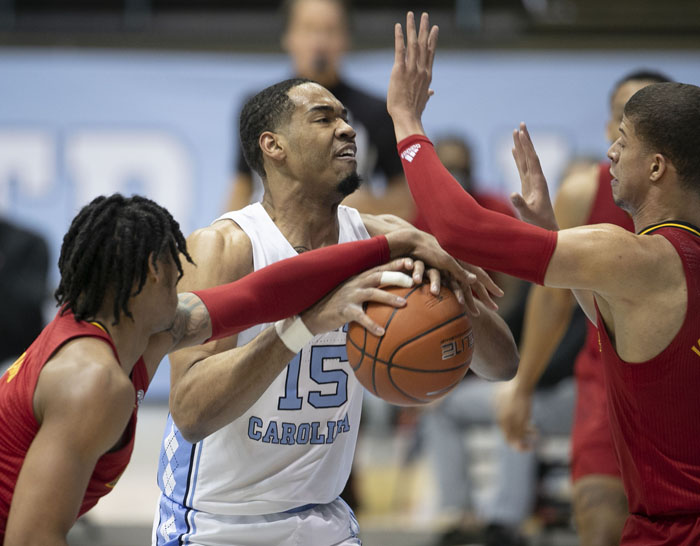 Garrison Brooks tries to keep the ball from Louisville defenders. He scored 12 for the Tar Heels in the victory Saturday. Photo courtesy of ACC

CHAPEL HILL — Day’Ron Sharpe had 21 points, 11 rebounds and two blocks to lead five North Carolina players scoring in double figures and the Tar Heels trailed for just 29 seconds in their 99-54 win over Louisville on Saturday night.

Louisville (11-5, 6-4) played for the first time in 19 days due to issues related to the coronavirus pandemic.

Carlik Jones hit a jumper to give the Cardinals a 2-0 lead but Walton answered with a 3-pointer 59 seconds into the game and UNC never again trailed.

Louisville shot just 33% from the field and made just 1 of 16 from 3-point range.

Sharpe stole a pass from Charles Mineland, passed to RJ Davis and filled the right side of the lane for an alley-oop layup to make it 91-50 with 3:31 to play. Creighton Lebo’s layup two minutes later capped a 22-0 run and gave UNC a 49-point lead.

The school said Saturday that the Tar Heels will host Marquette on Wednesday, which comes after they had a fourth game postponed in Atlantic Coast Conference play. Three of those postponements have been home games.

Last week the school added a nonconference game against Northeastern two days ahead of time after a game against No. 18 Virginia Tech was postponed. The game against Marquette comes after Tuesday’s trip to Boston College was called off.

None of the four postponements for UNC has been rescheduled. The announcement came shortly before the Tar Heels hosted Louisville on Saturday.