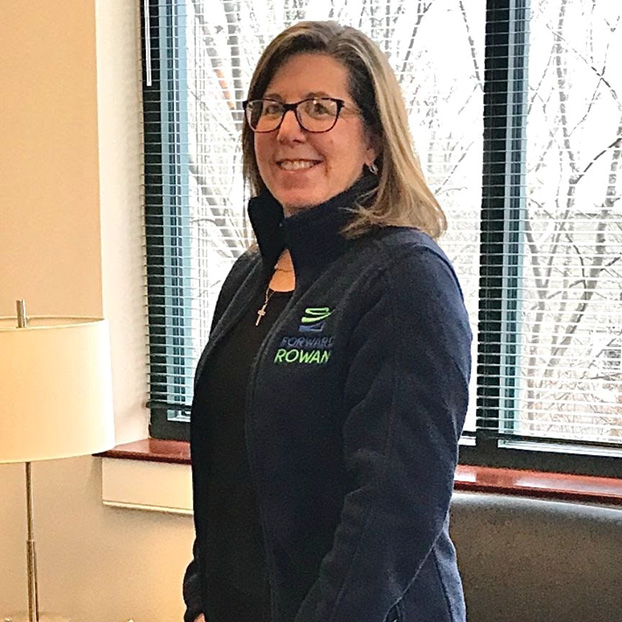 Denise Hallett, chair of the Rowan EDC board, also lended a hand with the Forward Rowan campaign. Photo submitted.

SALISBURY — Denise Hallett, who leads the Rowan Economic Development Commission as chair of the board, also volunteered to serve as a member of the Campaign Committee for the Forward Rowan initiative.

The Forward Rowan initiative seeks to spur economic growth in the county by using a public-private partnership between the Rowan EDC and local businesses.

“I’m proud to be part of the team that has crafted the Forward Rowan plan,” Hallett said. “Once implemented, this plan will bring greater prosperity, reduced poverty and enhance our quality of life here in Rowan County.”

Hallett currently serves as Manager of Government and Community Relations for Vulcan Materials Company, a producer of crushed stone for the construction industry. Hallett oversees Vulcan’s government and business relations for their North Carolina operations and is responsible for external public affairs in support of the company’s business development, community, and governmental relations objectives.

Hallett said in a news release that she is particularly excited about the first strategy in the plan for targeted economic growth and its three key objectives.

“The second key objective is to attract new firms and investments to Rowan County,” Hallett said.  “We’ve identified four business sectors that are an excellent fit for Rowan County and its workforce. Those include companies in advanced manufacturing, logistics and distribution, office and technology, and health industries. Our recent successes with Chewy, Snow Joe and Eastern Fence demonstrate the desirability of Rowan County and with an increased effort, we can bring even more jobs and investment to our area.”

Hallett explained that the third key objective is to grow and promote Rowan’s competitive advantages that attract business investment to Rowan County.

“The Rowan EDC has developed great relationships with our local and state governments and works closely with them to make sure our infrastructure and amenities are enhanced to support business expansion and development,” Hallett said.

Hallett called on other businesses to join the Forward Rowan campaign for economic development, which is now supported by nearly 40 local companies, including Hallett’s Vulcan Materials.

“As chair of the Rowan EDC, I ask you to consider investing in Forward Rowan,” Hallett said. “My company has and I hope yours will too. Let’s move Rowan forward together.”

LANDIS — The Wallace Site, located at 1001 S. Main St. in Landis, was recently designated as a certified site in the prestigious ElectriCities Smart Sites Program.

The Smart Sites program, also known as S2, was created by ElectriCities to assist member communities, such as Landis, in preparing shovel-ready sites for economic development.

“It is rare for companies to select an undeveloped, unimproved property on which to locate or expand their business” Rowan EDC Vice President Scott Shelton said in a news release. “Time is of the essence for these companies and if they cannot find an existing building to suit their needs, they strongly prefer shovel-ready sites with a substantial amount of due diligence already completed.  The Smart Site designation will be extremely valuable in helping the Rowan EDC bring more jobs and investment to the Town of Landis.”

As part of the S2 program, extensive due diligence was completed on the nearly 26-acre site, including a Phase I Environmental Assessment, Wetlands Identification and Delineation, Subsurface Exploration, and Historical / Archeological Studies.

In addition, conceptual drawings were prepared to demonstrate the development potential of the site. ElectriCities will also help to market the Wallace Site domestically and internationally at numerous trade shows and industry events

Doyon was one of thirteen North Carolina cotton industry members who were named to leadership positions with the NCC.

The leaders were named at the recent 2021 NCC virtual Annual Meeting. As the unifying force of the U.S. cotton industry, the Memphis-based NCC brings together industry representatives from the 17 cotton-producing states to establish policies reflecting the common interests and promoting mutual benefits for its broad membership and ancillary industries.

Jones brings over 16 years of governmental finance experience to the role, which she will assume on Feb. 22.

“I am pleased to announce the promotion of Jessica Jones to Finance Director for the City of Concord,” Payne said in a news release. “Jessica has served the City of Concord for more than 13 years; I am confident she and her team will continue to keep the City of Concord fiscally strong and assist in planning for future projects to enhance the quality of life for Concord citizens. I am proud to stand beside Jessica on team Concord.”

“Jessica has done a wonderful job supporting me for many years,” Hinson said in a news release. “I am thrilled to see her advance to this position; her extensive experience and expertise will be a valuable addition to our leadership team.”

“I am grateful for the opportunities that the City has given me to grow professionally and I am humbled to be selected as the next Finance Director,” Jones said in a news release.  “Being able to serve the City I grew up in is special and I look forward to continuing the success of the Finance Department to be responsible stewards of taxpayer dollars.”

A Certified Public Account since 2008, Jones worked at a public accounting firm for two years before joining the city of Concord.  Prior to Jones’ employment with the Finance Department, the city hired external auditors to prepare financial statements.  Jones brought her knowledge of governmental audits to the city and began preparing financial statements in-house, resulting in substantial cost savings to the city and a significantly smoother external audit process.  Also, under her supervision the city of Concord’s 2019 Comprehensive Annual Financial Report (CAFR) was awarded a Certificate of Achievement for Excellence in Financial Reporting by the Governmental Finance Officers Association. The Certificate of Achievement is the highest form of recognition and its attainment represents a significant accomplishment by a governmental body and its management.

The World University Games are the world’s largest event for student athletes. The games are held every other year in the odd year, with both winter and summer games in the same year.

The games have 15 required sports including Olympic staples such as athletics (track & field), basketball, diving, gymnastics, swimming, and volleyball. The host city for the games can propose additional sports for inclusion in the Games. The Summer World University Games take place over an approximately two-week period, during the summer months.

“We are very excited about the possibility of bringing the Summer World University Games back to the U.S., where it has only previously been held one time, in 1993 in Buffalo, New York,” Dan Guerrero, President of the USIUSF, said in a news release. “The next available year to bid on the Games, 2027, holds a lot of promise for Olympic sports in the United States as it is the year prior to the 2028 Olympic Games in Los Angeles, California.”

“We have been delighted with both the interest that the Raleigh-Durham market has shown in hosting the Summer World University Games, and the significant assets and experience the North Carolina Bid Committee brings to the table,” Delise O’Meally, secretary general of the USIUSF and a member of the FISU Executive Committee, said in a news release. “The fast-growing Triangle region, with its 10 colleges and universities, deep array of top-quality sports venues, and great track record of major multi-sport Olympic events is a natural for hosting the Summer World University Games.”

The bid process for the 2027 Summer World University Games is expected to continue throughout 2021 and into spring 2022, when it is currently projected that FISU will announce the 2027 host city. Bid milestones during the year are expected to include development and submission of a detailed formal bid document, conducting an extensive site visit for USIUSF and FISU officials, a FISU bid workshop, a presentation to the FISU Executive Committee, and meetings with FISU and Local Organizing Committee executives at the 2021 summer and winter games in Chengdu and Lucerne respectively.

The State Employees’ Credit Union recently announced that President and CEO Michael J. Lord is retiring effective Aug. 31, 2021 and will remain in his current role through the transition period to his successor.

The credit union’s board of directors has initiated a nationwide search with the help of Russell Reynolds Associates – a search firm with experience in the credit union industry – as part of the board’s long-term CEO succession plan.

Lord joined SECU in 1975, holding many leadership roles and helping the organization navigate numerous changes impacting the credit union and financial services industries.  Prior to being named president and CEO in 2016, Lord served as chief financial officer for over 30 years.

“Mike has been an integral part of the SECU leadership and family for nearly five decades.  He has shared a wealth of knowledge and made many contributions over his tenure, which have helped us anticipate and better meet the needs of our members.  We are extremely grateful to Mike for his leadership and commitment, particularly throughout the COVID-19 pandemic, and wish him the best in his much-deserved retirement,” SECU Chairman Bob Brinson said in a news release. “The board of directors’ CEO succession plan has us well positioned to find the right candidate who will understand and value the SECU culture of member-service and smoothly guide us through this transition and into the future. We look forward to the next chapter in the long history of SECU growth and success.”

The credit union expects to have the new CEO in place at the time of Lord’s retirement.