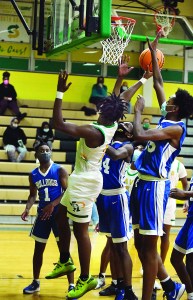 SPENCER — North Rowan’s boys basketball team had a chance to end the season with a winning record, but the Cavaliers dropped a close one at home on Friday.

North closed the books on the shortened season at 6-6, so while it’s not a winning season, it’s also not a losing season. North started 0-4 but was able to salvage a respectable season.

Chatham Charter (12-1) hadn’t lost this season until it fell to one of North Rowan’s Yadkin Valley Conference rivals, Uwharrie Charter, on Tuesday.

Adam Harvey led the Knights on Friday with 20 points. and 10 rebounds. The sophomore averages 18.5 points and 11.2 rebounds.

The Cavaliers held Chatham Charter to 38-percent shooting and the Knights didn’t make a single 3-pointer, but North still came up short.

Carpenter, a junior guard, led coach Jason Cauby’s Cavaliers with 11.3 points per game, including a 27-point explosion. Derrick Hanson (8.8 per game), Amari McArthur (7.3) and Kendrell Goodes (6.6) were next. Goodes, a senior, finished with 519 career points.

Causby has 227 coaching wins in Rowan County, with 56 coming at North.

Many of the Cavaliers now move on to football.