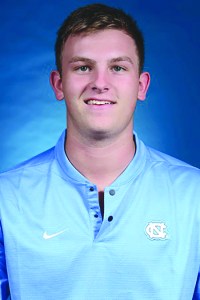 In a 6-3 win, Zach Miller hit a game-tying homer and  Jeremy Simpson had a two-run triple in the eighth to decide it. Bryan Ketchie and Sawyer Strickland (1-0) did the pitching.

• In a 5-1 Catawba win against the Bears, Trent Montgomery won in relief of Greg Brown and Robbie Cowie earned a save. Hunter Shepherd drove in two for the Indians.

Catawba Valley Community College’s Chandler Blackwelder (East Rowan) got off to a good start with  a 4-for-8 day, including a homer.

Catawba stayed undefeated with two wins at Emmanuel on Saturday.

In a 9-0 victory, Allie Baker hit a grand slam, Lexi Bryant had three hits, and Brooke Walser pitched a one-hitter.

•Gracie Gibson hit a three-run homer and Riley Tucker had a bases-clearing double in a 10-1 victory. Summer Howerton and Madison Hunter did the pitching.

ANDERSON, S.C. — Freshman Bernard Pelote erupted for 25 points and 12 rebounds to lead Catawba to a 94-90 SAC win at Anderson.

Catawba shot 55.6 percent from the floor and had a big edge on the boards.

Senior guard Craig Sabb became the 36th player to score 1,000 career points for Pfeiffer late in the second half of a 99-71 USA South win over visiting William Peace University on Friday in Merner Gym.

ANDERSON, S.C. — Taisha DeShazo surpassed 1,000 points for the Catawba women’s basketball team and Lyril Thorne had a career game in a 64-47 win against Anderson on Saturday.

Catawba held Anderson scoreless for nearly eight minutes at the outset and built a 17-0 cushion.

Anderson never was able to cut the deficit to under 10 points.

Shemya Stanback scored 12. DeShazo got nine and is the 18th in program history, to reach 1,000 points.

Goals by John Allen Ferguson, Eli Ham and Aleksis Suarez lifted West Rowan to a 3-0 NPC win against Carson on Friday. Jose Elizalde made eight saves for the Falcons.

Playoff pairings will be announced Sunday.

West Rowan stayed with Carson for a half, but the Cougars pulled away to win 69-45 in Friday’s NPC tournament title game.

Playoff pairings will be announced Sunday.

West Rowan beat North Iredell 64-52 on the road for the NPC tournament championship and the top playoff seed on Friday.

Braden Graham led the Falcons with 17 points, and   Macari Allison, AJ Mauldin and Jalen Moss also were in double figures.

Catawba was picked ninth in the SAC preseason poll.

Wingate is the favorite, with Queens second.

Catawba was picked fourth in the SAC preseason poll.  Wingate is the favorite, with Lenoir-Rhyne second.

Catawba won 1-0 against Tusculum on Friday in Pineville.

Catawba is picked 11th in the preseason SAC poll.

Wingate is the favorite, with Queens picked second.

Catawba is grouped in a pod with Wingate, Coker and Lenoir-Rhyne.

Catawba will open play on March 7 against Coker.