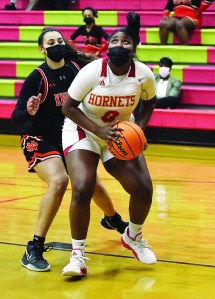 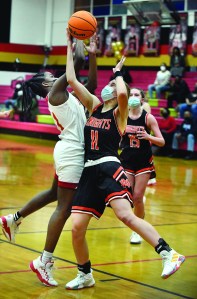 SALISBURY — The two meetings with their stiffest Central Carolina Conference challenger came just eight days apart, and both were on Salisbury’s homecourt.

Salisbury’s girls basketball team won against North Davidson again on Wednesday night. This time it was 48-45.

While the first victory against North Davidson  — 56-48 — meant a CCC regular-season championship, the second one meant a CCC tournament title.

It’s hard to win both crowns in the same year. Good Salisbury teams that won the conference in 2016-17 and 2018-19 fell short in the league tournament.

It was something of a breakthrough for coach Lakai Brice when the Hornets survived against Oak Grove in overtime to take the 2020 tournament. That win fueled a great playoff run.

Now the Hornets have won two straight tournaments. This was an odd one, a four-team deal, so maybe there’s an asterisk in there somewhere. But it will still go in the books as a tournament championship. Salisbury will take it. The Hornets earned it.

The modern era for Salisbury girls basketball began with the 1974-75 season. Salisbury won its first regular-season championship as a program in 1995. That was the team with Donna Carr, Carmen Weldon and Devina Dixon that ruled the Yadkin Valley Conference.

Salisbury had to wait until 2004, the Shayla Fields era and the CCC era, for the second title.

Now the Hornets have won 13 regular-season championships. They’re coming faster now. Unless something amazing happens, as long as they stay healthy, there will be another banner added next year.

This is a young bunch. The scorers are a sophomore and a junior. They all defend.

Wednesday’s conference tournament title is the ninth for the Hornets, who have rarely had a smooth path to championships. East Davidson presented some amazing teams. North Rowan had some tough ones. So did Ledford. Now it’s North Davidson.

While there have always been competent opponents, Salisbury now has won 30 straight regular-season CCC games and has won 68 of its last 73 CCC regular-season contests.

Salisbury is 8-0 against North Davidson since it came down from 4A to 2A, when Oak Grove opened 6.4 miles away.

Next fall, the Hornets and Black Knights will go their separate ways, with Salisbury in a 1A/2A conference and North Davidson heading to a 3A league that also will include Ledford and Oak Grove. But maybe the SHS-ND rivalry can continue. Both will be in smaller leagues next season, there will be non-conference openings, and the boys hoops rivalry is very solid also.

Salisbury’s girls are ranked first in 2A and 13th for all classifications. The Hornets allow 31.2 points per game.

North Davidson is ranked sixth in 2A and 29th for all classifications.

Salisbury (13-1) was fortunate that it started out fast in Wednesday’s title game.

It was 13-4 after a quarter. That early advantage proved to be just enough.

Natavia Taborn made some clutch free throws. The Hornets held on.

The Hornets won on a night that Kyla Bryant was held to 15 points. That’s limiting her in a big game when she knows she’s got to score. She got 23 in the first meeting with ND.

They also won on a night when Rachel McCullough was held to a season-low five points.

But they got 4s, 5s and 6s and 7s up and down the scorebook, which is how they do it. If you’re scouting the Hornets, it’s difficult to identify a third scorer. It’s a committee.

The Hornets, who have won 11 straight since a one-point loss to 4A Northwest Guilford, don’t have much in common with Carson, except when it comes to winning streaks.

Carson has five girls who shoot insane percentages on 2s and 3s, and the Cougars just blow you away.

With the Hornets, it’s mostly about grinding you down with toughness, grit and halfcourt defense.

Eight Hornets scored Wednesday. Only four Black Knights (11-2) scored. In the end, that was the difference.

North Davidson standouts Emily Hege and Courtney McMillan accounted for 39 of their team’s 45. Salisbury did a better job on Lettie Michael, ND’s third scorer, this time. She hurt Salisbury in the first meeting, but in the rematch, she only got four.

On Sunday, pairings will be announced. Salisbury, North Davidson and third-place Ledford, which is very good on defense, will find out what’s next.

The Hornets and Black Knights could meet for a third time as the playoffs progress, but both of them probably prefer that it doesn’t happen.

NOTES: Taborn has scored more lately — 21 in the last three games — and is up to 890 points for her career. She played her first three seasons at North Rowan. … Jamecia Huntley has been battling shin splints, but she came through with seven points in the tournament final. She’d scored only one point in Salisbury’s previous four games combined. … Haley Dalton is practicing and might be able to help in the playoffs. That’s been the plan for a while… Bryant averages 15.9 points per game, while McCullough averages 12.6.