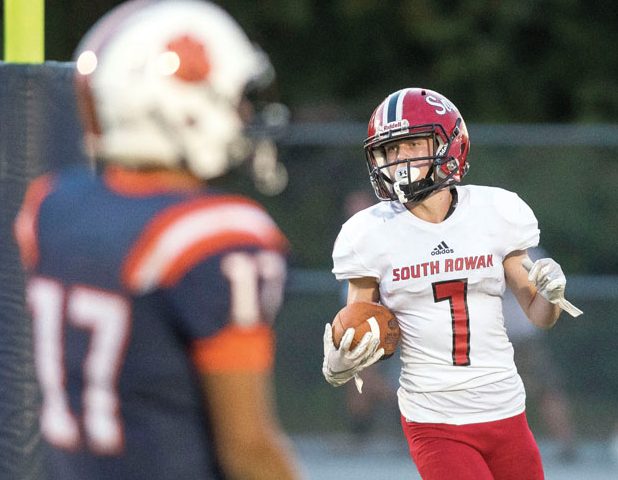 Third in a series of reports on local high schools …

LANDIS — Add trying to stay dry in a very wet February to the list of challenges facing South Rowan’s Daniel Yow, who has quietly moved from being a “young coach” to being one of the county’s veterans.

Time flies. This will be the sixth season that Yow, a former Catawba offensive lineman, has led the Raiders.

Victories on the field have been scarce, but Yow, as always, is upbeat and optimistic. He believes this can be the best team he’s had.

“It was a long off-season, but I believe we’ve had a very productive one,” Yow said. “The emphasis has been on hitting the weights because weight training not only makes you stronger, it helps with injury prevention, and we need to stay away from injuries.”

COVID protocols have been a headache for everyone, but Yow said the players and staff have done a great job adhering to limits and rules.

“The last thing you want is to be shut down,” Yow said.

The Raiders have been working diligently in groups — DBs/receivers, running backs/linebackers and linemen.

“School is out at 3:30, you get on the field at 4 and it’s dark at 5:30, so we’ve tried to get the most out of every minute,” Yow said. “We’re trying to develop some depth. Our backup offensive lineman might be a starting defensive lineman.”

The numbers are decent for a 2A school that will slide back up to the 3A ranks this fall.

“It’s a good group,” Yow said. “We average about 70 kids at practice. That’s not amazing, but we’ve been able to maintain our numbers in spite of COVID, so we’re pleased with that.”

South’s basketball season concluded on Tuesday, which means Yow welcomed several players back full-time on Wednesday, including his quarterback. That QB is junior Nathan Chrismon, who also is the standout shortstop on the baseball squad.

“Nathan is a phenomenal athlete who has been mostly a slot receiver,” Yow said. “He’s been playing basketball. He did well with basketball, and he’s going to do well with football. We all know that baseball is his future, but he’s got a passion for football. He’ll be a great leader for us.”

Yow recently told the team the story of Kordell “Slash” Stewart, the Pittsburgh Steelers quarterback/running back who also made a few starts as a receiver. That tale had relevance because Deal will be in a “slash” role as a running back/receiver/defensive back/punter. He’s also the backup quarterback.

“I watched Jackson kick a 35-yard field goal the other day,” Yow said. “He can do a lot of different things on a football field. He’s going to be a tired young man on Fridays.”

Landon McGee, who got carries last season in a backup role, is expected to be the primary running back. Wisdom Simms (6-3, 230) will give South the option of employing a power running game.

Bronson Hunt, a sophomore who was the jayvee quarterback as a freshman, probably will be in a receiver role. He’ll be a key guy.

“As far as pure athleticism, he rivals Chrismon,” Yow said. “He’s quick off the ball.”

The offensive line will have lots of new faces, but Yow is banking on right guard Hector Bernal, a returning starter, to be the anchor. Hector’s cousin, Aquilles Bernal, will play both ways on the offensive and defensive lines.

“We’ll have some young guys on the offensive line, but they’re bonding and buying into the concept that the 0-line is a team within a team,” Yow said. “I think the o-line will be a staple, one of our strongest points.”

South will be experienced on defense.

Those seniors are Ward Bond and Andrew Watkins inside and Luke Hiskey and Blayne Stewart outside.

Kameron Wallace was an All-Central Carolina Conference performer as a sophomore in 2019, but he will miss this season after suffering a torn ACL. He plans to be back in action in the fall of 2021.

South plans to use a base defense with two high safeties instead of one this season. Deal, Gabe Pozyck and Devin Arnette will be players to watch in the secondary.

“Arnette played defensive line as a sophomore and played linebacker as a junior,” Yow said. “Now he’ll be DB. He’s gotten taller and a lot faster.”

“He got faster and stronger,” Yow said. “He’s a completely different person. He’s been looking great.”

Jacob Ritchie, who is competing with Deal for punting duties, is also a probably starter on the defensive line.

Soccer player Alex Fike will be counted on for field goals and PATs.

Yow added that the Raiders, who haven’t ventured to the state playoffs since 2009, have picked up a couple of transfers from A.L. Brown who are fine athletes.

“We’ve got some talent,” Yow said. “We can surprise some people.”

South will scrimmage A.L. Brown. Opening night is against non-conference rival Carson on Feb. 26. After that, the Raiders will take on six CCC opponents, including Salisbury and North Davidson.