High school basketball: Carson girls make it 13 in a row 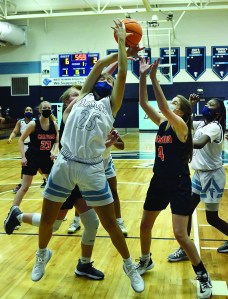 Carson (13-0) has put together an insanely dominant season in a league that’s down quite a bit from recent years. Carson is averaging 65.3 points per game, while allowing 26.6. In other words, the Cougars have been winning by 40 a lot.

The NCHSAA approved the running-clock mercy rule when teams established a 40-point lead in 2014, so Carson has frequently played brisk second halves.

Carson’s 2011-12 and 2018-19 squads scored at a pace similar to this season’s team and did it over the course of long seasons against stronger opponents, but Carson has never posted defensive numbers close to this season’s.

Because of strength of schedule — Carson’s only non-conference games were romps against South Rowan and Davie —  the Cougars are still ranked only 50th in the state for all classifications and seventh in 3A.

Carson is obviously good. How good we won’t really know until things get serious for the Cougars in the 3A state playoffs.

Carson hasn’t had many obstacles until just recently. The Isley sisters, Hannah and Lani, two of the Cougars’ top six players, have missed the last two games and will miss the conference tournament championship game against West Rowan that is scheduled for 5:30 p.m. on Friday at Carson.

Head coach Brooke Stouder said the Isleys are expected to return on Monday, which is good news for Carson fans.

Carson devastated South Iredell for the third time Wednesday. The Cougars had capped the regular-season fun by roughing up South Iredell 70-29 on the road and had demolished them 68-25 in China Grove.

South Iredell (5-8) had just survived a one-point game with Statesville on Tuesday and had nothing left in the tank to challenge the Cougars.

Carleigh Perry had 10 points, 13 rebounds and five steals for the Cougars.