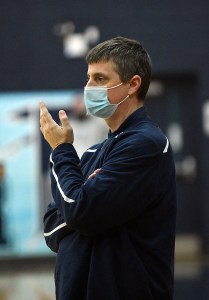 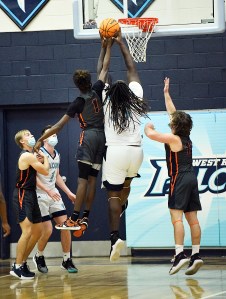 TROUTMAN — Emory Taylor made one last 3-pointer on the move, just before the buzzer, and Carson’s boys trudged off the court for the final time this season.

Tuesday night’s 62-58 setback at South Iredell in a North Piedmont Conference Tournament game was another all-out effort by the Cougars that ended with all-out frustration.

Taylor scored 21, while Jay Howard had 12 for the Cougars, who rallied from a shaky start to make it a close game.

South Iredell (5-8) made 17 free throws and got 16 points, 14 rebounds and six blocks from Gavin Morrison. Chase Labelle also had a double-double with 10 points and 12 rebounds.

With three minutes to go, down one, the Cougars were still in good position to win. But several turnovers later, they were playing catch-up one last time.

“It was kind of the story of our whole season tonight,” head coach Brian Perry said. “A few too many turnovers and a few too many missed free throws. Our guys competed really hard this season, but it was one of those years where if it could go wrong, it did go wrong. If we were up six with two minutes left, our opponent probably was going to make two 3-pointers.”

Carson had to play a number of early games without Taylor and Johnson, which meant the Cougars had no chance, but they fought on.

“I didn’t know if we’d be able to win any when the season started, but maybe we should have won a couple more than we did,” Perry said. “We let two get away at the foul line.”

One of those was the 66-62 overtime loss to South Iredell that closed the regular season.

Going into this season it looked likely, on paper, that Carson would lose them all by 40.

Taylor, who had 51 career points prior to this season, and Hunter Burris, who had 23, were the only returners.

Merriman had 23-point and 24-point games against Statesville, and it was fatal for Carson when Merriman went down with an injury and missed the last three games. If he’d been on the floor, they probably win both of those South Iredell games at the end of the season. Merriman averaged 10.5 points.

“The thing is we are so much better now than when the season started, just because of experience,” Perry said. “In a normal season, we’d only be at the halfway mark after 13 games, with conference games still in front of us, but this isn’t a normal season. We’re done.”

Burris only averaged 5.1 points, but fought inside against much larger players.

“He was the heart and soul of  a lot of the great efforts that we had,” Perry said. “If there was a rebound he had a chance for, he came out of there with it.”

Beasley had a couple of big games — 18 against East Rowan, 14 against South Iredell.

Taylor, a sophomore, averaged 13.3 points to lead the team. He scored 20 or more three times.

“I think all those guys learned a lot, and they’ll all benefit from all those minutes they played this season as their careers move along,” Perry said. “I can’t say enough about Merriman and Johnson, two football players who came out and did so much for us. Now we’ll go into next season with a lot of experience and we could have a pretty good team.”

Carson closed the books with only two on-court wins, but the season will be recorded as 3-10 due to a forfeit by East Rowan.

South Iredell wrapped up its season Wednesday with a 72-48 tournament semifinal loss at North Iredell.