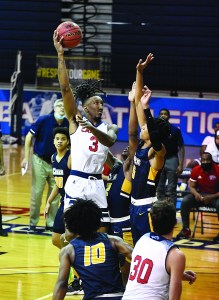 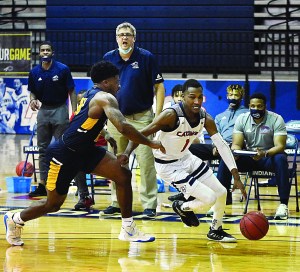 SALISBURY —Marcus Burwell took it on his shoulders to stop a five-game losing streak, and Catawba edged Newberry 86-83 on Wednesday.

The point guard connected on five 3-pointers and careered with 29 points in the South Atlantic Conference contest played at Goodman Gym.

But Newberry put together a 13-0 run in the second half, and Catawba was forced to hang on at the end. Carter Phillips made a key 3-pointer and  Burwell assisted on dunks by Larry McLeod and Caleb Robinson at crunch time. Then Catawba went 5-for-6 at the foul line in the last 30 seconds.

Catawba had been defeated at Newberry (7-4, 7-4) on Monday despite 21 points by Burwell when the Wolves’ Quandaveon McCollum produced 29 points and 14 rebounds. McCollum was limited to five points and four rebounds in the rematch.

Newberry relied heavily on the 3-point shot and was 14-for-33 from long range.

TJ Brown scored 22 for the Wolves, while Aaron Robinson scored 21.

Catawba is scheduled to play at Anderson on Saturday at 4:30 p.m.