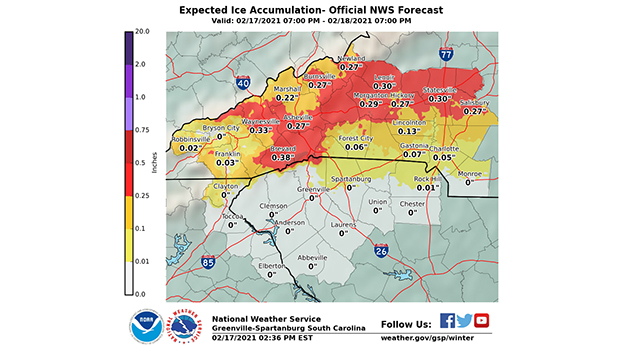 SALISBURY — With winter storms set to sweep across North Carolina, the National Weather Service is predicting that up to one-half inch of ice will cover some parts of Rowan County on Thursday.

As a result, the county will be under a winter weather warning until at least 7 p.m. on Thursday. Freezing temperatures could lead to dangerously icy roads, falling trees and widespread power outages.

“People need to be ready to stay home and be prepared to lose power for a while, especially in the northern, western and Piedmont counties,” Gov. Roy Cooper cautioned in a news release on Wednesday afternoon.

In advance of the impending weather, Cooper declared a state of emergency and is allowing for transportation waivers permitting utility companies to bring repair crews from out of state and get faster access to communities who have lost power. The governor also authorized the activation of 40 National Guard personnel to support fallen tree and debris removal.

The National Weather Service forecast predicts that precipitation will begin around 12 a.m. on Thursday morning and will combine with freezing temperatures around 6 a.m. to create freezing rain and ice.

The Rowan County Health Department canceled its planned vaccination clinic at West End Plaza on Thursday in advance of the winter storm.

Rowan County Emergency Management Division Chief TJ Brown said he is expecting the northwest portion of the county to receive the brunt of the accumulated ice.

“We are expecting that there will be icing in the county more prominently in the northwestern portion in the Scotch Irish, Rowan and Iredell area and the likelihood of accumulation decreases the further southeast you go across the county,” Brown said.

The combination of ice and the potential of winds reaching about 10 mph could spell danger for tall trees anchored in soil that has been saturated by water, Brown said.

If too much ice accumulates on those trees, it makes them top heavy and could cause them to fall and damage nearby power lines. In addition to trees crashing into power lines, Brown said ice could cause the power lines to break and sever the energy heating homes.

“Make sure that you avoid any power lines, any trees down that might be entangled in power lines,” Brown said. “Assume that the power is on even though it might not look like it is.”

Duke Energy on Wednesday projected that the precipitation and wintry winds could cause 1 million people to be without power in both North and South Carolina. The energy company announced that it has thousands of employees poised to support its response to bad weather, including 5,400 line technicians and vegetation workers.

In the case that a person’s home does lose power, Brown cautions against trying to use grills or ovens as makeshift heaters.

“The gases that offset off of that will reduce the amount of oxygen that’s available in the room and people will end up basically going to sleep and dying,” Brown said.

He also has advice for those using generators to heat their homes.

“If you do use your generator, make sure you’re shutting off your main breaker so you don’t end up back-feeding your power lines,” Brown said.

Brown said the county is hoping to avoid having to open shelters in order to prevent the spread of COVID-19, but that it is an option if conditions worsen on Thursday. He advised people to reach out to any nearby family members if they do lose power in their homes.

As of Thursday night, Brown said that neither the city of Salisbury or the North Carolina Department of Transportation has plans to spread salt, or “brine,” the roads in preparation for the winter storm. He encourages people to stay off the roads unless absolutely necessary. For those who do end up driving, Brown encourages them to drive slowly.

“It may be fine to drive in one area and then a little bit up the road there will be ice and you won’t have time to react, so slow down and use caution,” Brown said.