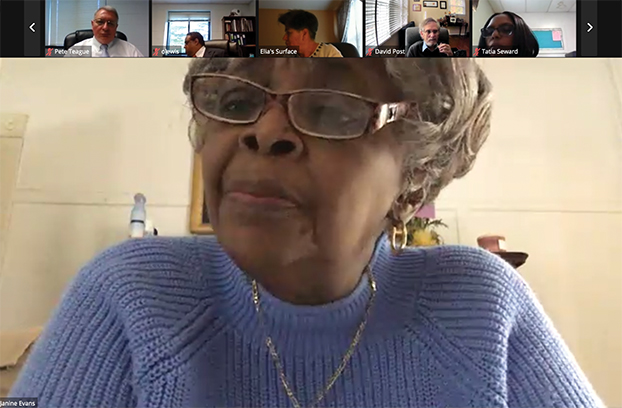 Historian Raemi Evans delivered a presentation on the history of several Black-owned businesses in Salisbury during the Rowan Chamber's Minority Business Council Meeting on Tuesday.

SALISBURY — In a black and white marbled composition notebook, Raemi Evans has compiled an extensive list of Black-owned businesses that once operated in Salisbury.

During the Rowan Chamber’s virtual Minority Business Council meeting on Tuesday morning, Evans cracked open that notebook and shared her wealth of knowledge on a variety of Black-owned businesses that populated parts of downtown Salisbury and West Horah Street.

While Evans, a retired educator and historian, has information about countless Black-owned businesses in Salisbury, she focused on the areas of town where a majority of them were located during her presentation.

Many of the businesses that Evans detailed thrived in the early and mid-1900s, when segregation was still in effect and the African-American community was forced to create businesses of their own. Sometimes the businesses were small operations based out of people’s homes, Evans said, while other businesses were major factors in Salisbury’s economy.

“There was a need for entertainment and we had eating establishments, cafes and so I think there was a desire to show the way in which we wanted our lives to be,” Evans said.

In the notebook, Evans said she has information on over 30 groceries and more than 40 cafes.

Among the businesses that Evans discussed were three grocery stores owned by the Lash family. Wiley Lash, known by many as the first Black mayor of Salisbury and a leading force behind school integration, owned the Lash’s Self-Service Store on East Council Street. His mother, Mary, and brother, Traugott, also maintained stores.

“The Lashes had three actual grocery stores,” Evans said. “The mother had one on West Innes, which was a very strong area for business but not African-American business. Traugott had one on the corner of South West and then of course Wiley. They were businesses that were pretty large for the time.”

Salisbury City Council member David Post, who spoke after the presentation, remembers visiting Mary Lash’s grocery on West Innes Street when he was a child.

“There was a lot of Black and white mixing there,” Post said. “I lived on Liberty Street, which was two blocks away from Mrs. Lash’s store. It’s where I went to buy candy. She had a lot of penny candy.”

In addition to groceries, cafes, cleaners, funeral homes and doctor’s offices owned by Black entrepreneurs, Evans told the story of two Black-owned theaters in Salisbury. The first, called the Ritz Theatre, is now the site of The Reach Church at 722 W. Horah St.

“It was built by Traugott Lash and we always heard that he said that he wanted his daughter to have a place to see the movies without having to go downtown and sit in the balcony,” Evans said. “For a period of time, maybe about 10 years, that theater did well.”

Well before the Ritz was built on West Horah Street in the mid-1900s, Evans said, there was a theater that accommodated African Americans in downtown Salisbury.

“The Princess Theater was erected in 1908 and it is documented as being the only African-American movie theater during that time in North Carolina,” Evans said.

The theater, which Evans said was likely located at 114 E. Fisher St., remained open until 1916.

In addition to having an entertainment hub at the Ritz and Princess theaters, Evans said that some African Americans spent their free time at a casino-like business run by Dentist Theodore Evans that featured fine dining, swimming and other recreational activities. Theodore Evans operated his dentist practice in Salisbury for 18 years before moving to Los Angeles. His son, Mike Evans, went on to play Lionel Jefferson on The Jeffersons and created Good Times.

Theodore Evans was far from the only African-American doctor in town. Dr. W.A. Coleman and Dr. Ezell practiced above Wiley Lash’s grocery on East Council while L.C. Jones and his son Clinton Jones operated their dentist offices on North Lee Street, Evans said.

The African-American business community faced a number of challenges, including the ever-present threat of white supremacists. That threat came to bear in the 1960s, Evans said, when the Ku Klux Klan launched an attack on a string of Black-owned businesses on Lee and East Council streets.

“The sad thing about this particular area is that at one time, the Klan came down Lee Street. It was a bad situation,” Evans said. “The only thing that stopped it, besides some of the police trying, was a bad storm that really stopped some of the fighting and so forth. This was the area the Klan chose in 1964 that the Klan tried to disrupt.”

Many of the businesses that Evans mentioned in her presentation weren’t wiped out by the KKK, she said, but were eventually lost during the process of urban renewal. Several locations of former Black-owned businesses have changed hands and now serve other purposes, such as City Tavern, which was once a cafe owned by Theodore Ramsey.

After Evans’ presentation, members of the Minority Business Council expressed their interest in helping Evans find a way to publish the wealth of information in her notebooks as a book that can be kept as inspiration by members of the Black community.

“I would like to challenge all of us, if you know of any way or funding that is available that would help us to publish this wealth of information because it’s so much and I would hate for this information to not be passed on to generations to come,” Esther Atkins-Smith said.

More information about the Minority Business Council can be found online at business.rowanchamber.com.