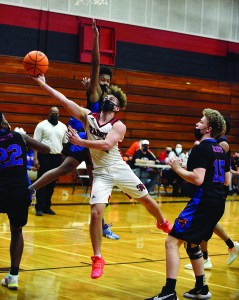 LANDIS — The seniors on South Rowan’s boys basketball team had an opportunity to win their last game and made the most of it.

South beat East Davidson 52-38 on Tuesday, with senior Barrett Thompson leading the way with a career-high 22 points. He’d scored 17  against North Davidson two weeks ago for a new high and he stretched his PR some more.

Thompson had a good season, averaging a team-best 9.4 points per game.

Devin Skeen and Mason Albertson scored 10 each for the Golden Eagles.

South started flat, but had things rolling by halftime and beat East Davidson (0-13) for the second time. South’s other wins came against South Davidson and West Davidson.

I hate that the season is ending, as we were starting to come together on offense,” Blevins said. “For all the twists and turns of this season, I was really proud of these young men. They took  it well and I think they excelled with it.”

South improved defensively about 7 points per game from last season.

Swanson loses out in salary arbitration with Braves