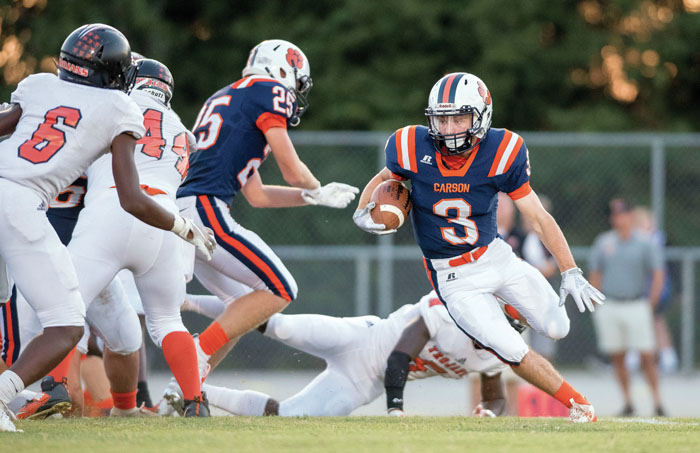 While the Cougars haven’t won a state playoff game since 2010 or been part of the playoffs since 2016, there are reasons to be optimistic for this COVID-shortened season.

Most of those reasons have something to do with muscle. Second-year head coach Daniel Crosby is confident the Cougars are much bigger and stronger than they were the last time they played football games.

“It takes time to get a weight program rolling, but I can see the difference in a lot of our guys who bought into it,” Crosby said. “A lot of guys have transformed their bodies, by continuing their workouts even when we couldn’t do a lot at the school. I’m looking forward to seeing them shine.”

Aaron Bradshaw was a 160-pound linebacker the last time he played under the Friday night lights. Now he’s 200 pounds. Linebacker Carter Dowd has pumped up from 170 to 200 pounds. Andrew Rollins was an undersized 170-pounder who still made all-county at defensive end. Now he’s 205 pounds, without losing a step.

A lot of Carson’s skill players are finishing basketball this week — Emory Taylor, Brodie Johnson, AJ Merriman and Hunter Burris, among others — but they’ll make an impact on the football program.

“It’s been a crazy year with the adjusted sports seasons, basketball before football, and all that,” Crosby said. “But we’ve got committed kids. We haven’t lost many football guys. We’ve got pretty good numbers, 70 to 75 in the program.”

“He’s got a big body and the plan is to throw it up there to him and let him make some plays,” Crosby said. “He’s been a leader all fall and winter.”

Johnson is another returning receiver, and he’s gotten taller and faster since last season. Taylor will also figure in as a receiver. Merriman is a returning starter at cornerback, but the Cougars also plan to use his athletic ability some on offense. Jacob Bost is one of those kids who never misses a workout or practice, and he’ll help as a receiver or in the defensive secondary.

Easton Mullis will be used at H-back.

In the backfield, Carson will miss 1,000-yard rusher Hunter Courtney, but CP Pyle is capable of a huge year if he can stay healthy. Pyle has experience at safety, but the plan is for him to focus on offense.

“He’s still the fastest kid in the school,” Crosby said.

When Carson uses a two-back set Jordan Garland, a 230-pound bruiser, will join Pyle in the backfield. Garland missed a big chunk of last season after suffering a finger injury that required surgery. He will also start on defense.

The offensive line has undergone coaching changes, with the retirement of Barry Mitchem and the loss of Chris Hassard to the college ranks. So Crosby has spent a lot of his time with this group. He likes what he sees. This could be where the Cougars have made their biggest gains from 2019.

Left tackle Cole Carmack, left guard Ben Klein, center Ethan Wilhelm, 6-foot-5 right guard Coby Sandusky and talented sophomore right tackle Joseph Giles are probable starters. Versatile Caleb Moore can be plugged into the line at any position. Cody Russell and Tristan Ruhnow are also in the mix at tackle, as Giles is being counted on for a lot of defensive duty.

“Giles has a chance to be our best football player.” Crosby said. “Sandusky is a monster. Klein is really strong and we’ve moved him from center to guard, so he can block people without having to worry about it snapping it. All those guys have made a lot of progress. We’re bigger and stronger at every position from 2019. ”

The secondary should be solid. Connor Floyd was one of Carson’s best players a year ago before suffering an ACL injury.

“He looks more like a linebacker at 190, but he moves really well,” Crosby said. “He’ll be the free safety.”

The other safety will be Kadrian Smith.

Merriman hurt an ankle late in the basketball season, but Crosby is optimistic he’ll be ready to go for Carson’s opener. He’ll hold down one corner.

Weston Lee is the likely starter at the other corner. Receivers such as Johnson and Taylor also will be called on to help out on defense.

Bradshaw and Dowd are experienced linebackers. Crosby is also high on Austin Cook and Jake Ross.

“The plan is to keep a lot of fresh bodies rotating in there,” Crosby said. “We’ve got some depth.”

Carson is blessed with specialists. Punter Ben Blumenthal and placekicker/kickoff man Andrew Beaver give Carson a chance to have stellar special teams.

“Those kids work at it and the kicking game is something I don’t have to worry about,” Crosby said. “We made every extra point kick last season, and I don’t know how many high school teams can say that. The hope is that this season we’ll have more extra points for Beaver to kick.”

There are challenges ahead for all teams, including extensive COVID protocols and the unfavorable weather conditions that are common in February and March.

It’s been extra wet since official football practice started. Carson did get to spend a day working outside on A.L. Brown’s turf field.

“The kids like being in the mud for a while,” Crosby said. “But it’s hard to get better at football practicing in mud.”

Carson will scrimmage Concord as it prepares for opening night.

This is a strange football season that has been in the works since July, but it’s finally on the horizon. Carson opens against South Rowan on Feb, 26.