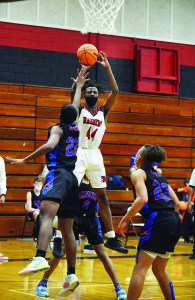 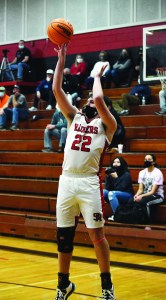 THOMASVILLE – South Rowan’s boys basketball team had a last-second shot to win against Thomasville on Monday but took a tough loss.

The Bulldogs made a game-deciding floater with six seconds left and held on 62-61 in one of the extra games being played this week by Central Carolina Conference teams.

The 61 points matched South’s season high. The Raiders put three in double figures for the first time this season.

It was an extraordinary turnaround for South, which lost 74-34 to the Bulldogs in an earlier meeting.

“We got off to a slow start with a lot of early turnovers,” South coach Daniel Blevins said. “We got settled down after the first mask break and got into a rhythm, which is difficult with the way Thomasville likes to press.  At halftime, we had made note of things that they were doing in the halfcourt that we could take advantage of.  It really boosted us back in to the game. ”

Jayden Dextraze scored a season-high 12 for the Raiders (3-10). Barrett Thompson had 11, Marcus Holloman scored 10, and Nathan Chrismon had nine.

Thomasville (6-5) got 16 points from Malcolm Knight, while Jahnri Lucky had 13.

“We had a shot at the end down by one,” Blevins said.  “It’s hard to go the length of the court and get a good shot off in under five seconds but we did and it was just a bit right.  I was proud of the effort on defense and rebounding tonight. It was tough to lose, but we gave ourselves a chance.”

South will wrap up the season tonight at home against East Davidson.