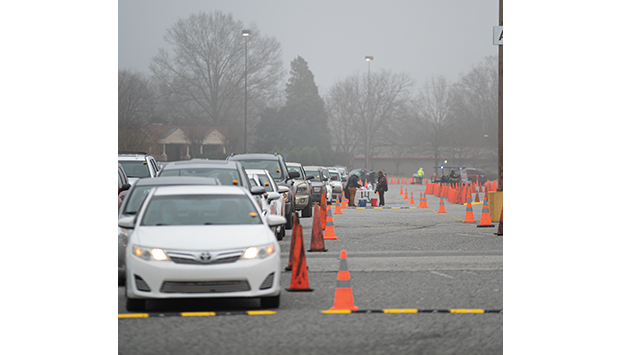 Josh Bergeron / Salisbury Post - A line of cars waits at West End Plaza to receive vaccinations or for the requested 15 minutes after being vaccinated to check for any reactions.

SALISBURY — The Rowan County Board of Commissioners on Monday night received an update from Public Health Director Nina Oliver about the current state of the county’s COVID-19 vaccination rollout.

Oliver updated commissioners that the Health Department has dispensed 11,929 first doses and 4,889 second doses, bringing the total number of residents who have received at least one dose to 16,818. However, Oliver said that doesn’t take into account the people who have been vaccinated at clinics at the Salisbury VA Medical Center or through the federal government’s long term care vaccination program.

Oliver said that the county’s ability to vaccinate citizens is dependent largely on the number of doses that it is allocated from the state.

Commissioners challenged Oliver to find a way to receive more vaccine doses from the state by demonstrating both an improved collaborative approach and by showing the ability to host “mega events.”

“Either we sit back and accept our 300 and we go quietly into the night, or we try to get as many as 3,000 a week or, on the behalf of the folks of the county, what do we have to do to outperform what we’re doing? It may be thinking much bigger than we are,” Chairman Greg Edds said. “We’ve got a lot of high schools with football stadiums and colleges with football stadiums.”

Edds specifically mentioned that he would like to see the county receive 10,000 doses of the vaccine one week.

Edds told Oliver that he would like to see stakeholders who could help with the vaccine distribution be brought together by the end of the week to brainstorm ways to improve the approach.

“I think we need to have a day set aside where the phone calls stop and we get emergency services and Catawba and Livingstone and all these folks in a room and we get these smart folks to figure out how we come together as a community and put all of the pieces together,” Edds said.

Dari Caldwell, chair of the Rowan County Board of Health and retired president of Rowan Medical Center, said it would be a “simple matter” to put together a community meeting. Caldwell also said that she believes the county has the resources to host a major vaccination event.

Oliver cautioned commissioners that, even if Rowan County does demonstrate these things, there’s still no guarantee that the state would provide the necessary doses.

If the county did receive more doses, Oliver said she was confident in the Health Department’s ability to distribute all of them.

“I’m concerned about the storm coming up from the Gulf,” Klusman said “I’m concerned about our volunteers. Last week, I can’t remember which day, but the tent that we have our vaccinations going on is over the storm sewer, and the center two lanes where people were getting the shots, people were standing in two to four inches of water on a very cold day. That’s one of my concerns.”

Oliver said that no vaccination clinics have yet been canceled due to weather.

Klusman also said that she would like to see the vaccination events moved inside in order to give elderly citizens easier access to bathrooms after stating that she’d heard of several people soiling themselves while waiting for vaccines during clinics at West End Plaza.

Oliver said that she would meet with emergency services and law enforcement on Tuesday and begin planning to move Thursday’s vaccination event inside. Emergency Services Director Allen Cress said that the ability to move it inside would rely on available resources, but that it would be possible to make it happen.

While the Health Department determines ways to receive more doses from the state, it is also planning to begin vaccine distribution starting on Feb. 24 to individuals contained in group three, which includes teachers and childcare professionals.

“The issue with this is we still have folks in group one and group two to vaccinate and then we have this large portion of group three that we now have to vaccinate,” Oliver said.

Oliver said that there are roughly 30,000 individuals in Rowan County who are in group three. In talks with the Rowan-Salisbury School System, Oliver said that it was determined that the focus will be on staff members who work in kindergarten through fifth grade.