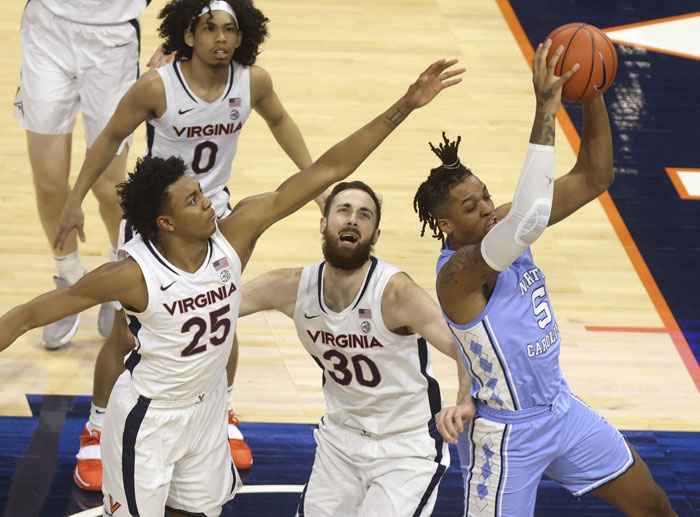 CHARLOTTESVILLE, Va. —  Jay Huff had 18 points and 12 rebounds and No. 9 Virginia took control early and beat North Carolina for the seventh consecutive time, 60-48, on Saturday night.

Sam Hauser added 17 points for Virginia (15-3, 11-1 Atlantic Coast Conference) and Trey Murphy III had 12 as the ACC-leading Cavaliers won their fourth in a row.

The Cavaliers led 21-4 midway through the first half as the Tar Heels missed 13 of their first 15 shots. North Carolina (12-7, 7-5) closed to within 27-18 by halftime, but never threatened. The Tar Heels finished just 2 for 16 from 3-point territory.

“Sam is always a lights-out shooter. I feel like I’ve been shooting it well recently and it’s hard to guard,” Huff said.

Walker Kessler led UNC with nine points. The last time no Tar Heel scored in double figures was March 4, 1966, a 21-20 loss to Duke in the ACC Tournament in Raleigh, North Carolina. John Yokley led UNC with six points in that game.

Tar Heels coach Roy Williams said he’s at a loss to determine why the Tar Heels have struggled so much against the Cavaliers.

“I can’t speak to all our teams in the past. Last year, we have a lead and they make one with eight-tenths of a second to go,” he said. “The year before, we played them in the Smith Center and they had to go to the video to decide that (Coby White’s) 3-pointer was not good and then they laid it up and had to go to another video to see if it was good for them and both calls went their way.”

“It’s hard to simulate that in practice,” Williams said. “We don’t have a four and five man on the blue team that can go out there and make all those shots like they did.”

North Carolina: The Tar Heels remain offensively inconsistent. They came in averaging 74.1 points, but scored just 50 two games ago in a 63-50 loss at Clemson, then had 91 in a four-point victory against Duke in their last outing. Before the loss to the Tigers, they had scored at least 75 points in five consecutive games.

North Carolina is home against No. 18 Virginia Tech on Tuesday night.

Virginia: Reece Beekman, who shares point guard duties with Kihei Clark, had big numbers in columns that would not normally be associated with a 6-foot-3 freshman guard. He finished with just one point, but had eight rebounds and seven assists.

“I know I’m getting the assists, but they’re making the shots,” Beekman said.

Virginia heads on the road to play at No. 17 Florida State on Monday night.

Mike Bothwell, who led the Paladins in scoring heading into the matchup with 16 points per game, scored just five.

Mercer trailed by 18 with 7:29 to go and got within two twice in the last 20 seconds but couldn’t get a final 3-pointer to fall at the buzzer.

NORFOLK, Va. (AP) — Kalu Ezikpe had 13 points as Old Dominion beat the 49ers.  A.J. Oliver II added 11 points for the Monarchs (11-5, 7-3 Conference USA), who held Charlotte to 28.6 percent shooting, the lowest mark of the season for an Old Dominion opponent.

ACC roundup: Seminoles’ depth pays off against Wake in…