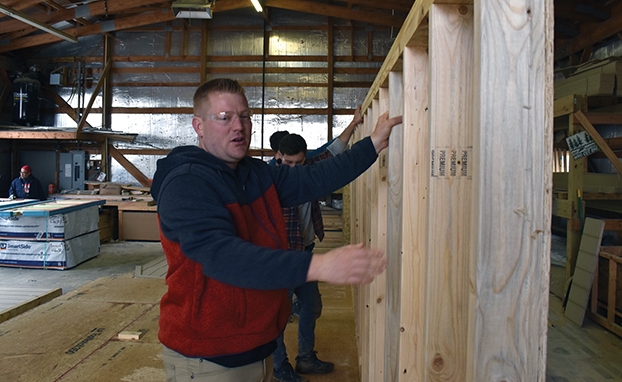 Silas Bowling, the owner of Sheds by Design, works with two employees to install the side of a shed. Ben Stansell/Salisbury Post

SALISBURY — Sitting in his office on West Innes Street, Conrad Eaton is surrounded by sheds.

That’s how it’s been for most of his life.

When he was just 14 years old, he started working alongside his younger brother, Merritt, at their father’s shed and storage business, hammering together huts and tearing shingles off roofs. Growing up in a Mennonite-Baptist household, Conrad’s days were structured. He didn’t watch TV or play video games. Even if his parents had allowed it, there wouldn’t have been much time. 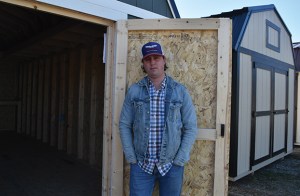 “I would go to work all day and come home and do school at night and then have chores on top of that,” Conrad said. “We were always very busy.”

Conrad continued to work for his father’s company,  Liberty Storage Solutions, until he was 29. That’s when he decided to step out on his own and build his own shed business.

“When I initially told my dad, he was taken back because it was hard for him,” Conrad said. “I used to work in his business. So, I went from being involved in his business to actually being a competitor.”

Conrad’s father, Bobby Eaton, soon came to terms with the move and has been supportive of his son’s venture, which is named in part to honor him.

“The reason I named my business Legacy Shed Company is to build a legacy in our community, a legacy of hard work and dedication as well as of integrity and quality,” Conrad said. “Also to continue my dad’s legacy. My dad has always been a hard worker.”

Bobby always taught Conrad and Merritt, along with their six other siblings, how to grow a business, which is what Conrad has been doing since he opened Legacy Shed Company in late 2019.

After starting with just a few employees, Conrad has grown his team to around 30 people. In 2020, Legacy surpassed $2 million in sales and was building $150,000 worth in units per week as the demand for sheds skyrocketed during the COVID-19 pandemic. The company now sells and delivers sheds in North and South Carolina, Georgia and even Alabama.

“Shed sales have shot through the roof,” Conrad said. “Across the industry, we’ve seen record sales. Basically, factories are unable to keep up. Last year, we were as far as eight weeks behind on orders. It’s a rapidly growing industry.”

The shed business has been expanding for years, Conrad said, but the recent growth has been spurred mainly by the COVID-19 pandemic.

“A lot of people have been forced to be at home. Now they’re cleaning out their garage and doing garden work and doing the ‘daddy do’ lists and finally getting stuff done,” Conrad said. “And then of course you have people buying them as little office spaces because now people have to work from home. They’re no longer going into their business, so they buy a little building and finish it out, not as living quarters, but as a little man cave or to get out of the house and do office work quietly and alone away from the kids.”

The high demand for sheds has allowed Conrad’s company to expand while competing against both his father’s business and the company started by his brother Merritt, called Heritage Shed Company and also located in Salisbury.

“We’re all actually competitors, but we get along great,” Conrad said. “There’s more than enough to go around. It’s an interesting family dynamic because we’re all competitive, but in a good way. We don’t avoid talking about business when we’re all together, no matter what we do. It’s always a good thing to be like that to where we aren’t fighting each other.”

The Eatons aren’t just competing with family. There are dozens of shed companies in and around Rowan County that are taking advantage of the shed boom, including Sheds by Design.

Started by Silas Bowling in late 2018, Sheds by Design is a small, family-owned operation located in Cleveland. Bowling learned how to build sheds originally while working for Liberty Storage Solutions and before eventually his own business.

The first six months of owning his own shed company were difficult, Bowling said. Now that the industry is booming, so is his business.

Bowling said he prides himself on being able to build and deliver custom sheds quickly, which has been more difficult as of late due to supply chain issues and sky-high material prices driven up by the pandemic. 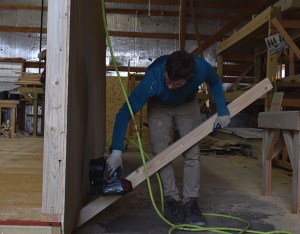 Although lumber prices have dropped from hitting a record settlement of $928.20 per 1,000 board feet on Sept. 1, Bowling said that accessibility to lumber is still an issue.

“They say one of the biggest risks is not necessarily the price I’m paying for lumber, but the lack of supply,” Bowling said.

Those same issues have slowed progress in Conrad’s shed-building facility in Pickens, South Carolina, which is run by his business partner and cousin. The major dilemma for Legacy, Conrad said, is keeping shed prices affordable despite the high cost of lumber.

“It’s about still trying to be affordable as a company and profitable and having a good product,” Conrad said. “It has been very, very stressful.”

Conrad estimated that up to 90% of his sheds are purchased on rent-to-own payment plans while Bowling said that about 40% of his customers are on rental contracts.

Affordability and quality are the attributes that Conrad has tried to instill in his business, which he said he models after a local Salisbury restaurant.

“Legacy is trying to be like Hap’s,” Conrad said. “We’re trying to serve hotdogs and burgers and do a really good job to where people will line up out of the door for a good product. We don’t offer as many options as far as fancy goes, but we offer a superior quality and we’re trying to stay in our lane as far as what we offer.”

Like Hap’s Grill, Conrad hopes that the shed boom continues and that customers will continue to line up for years to come.

Editor’s Note: This story has been updated to correctly reflect the name of a person pictured.