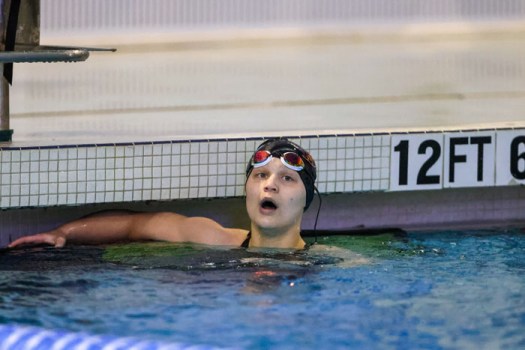 They rode home by car from the Triangle Aquatic Center, passengers bubbling over with joy and pride and a sense of accomplishment.

Simply put, the senior siblings were happy. In a 10-minute conversation, they expressed that they were “happy” at least 10 times. So happy, very happy, extremely happy, incredibly happy.

Happy for a reason. They had gone out on top as high school swimmers, with medals draped around their identical necks.

For Emily, the distance phenom who signed with West Virginia, and for Katie, the versatile swimmer headed to UNC Wilmington, Friday’s 1A/2A Championships couldn’t have gone any better.

Emily won her fourth and fifth state titles, defending her crown in the 200 freestyle and making it a three-peat in the 500, an event she’s owned at the 1A/2A level for a long time.

Five individual state championships in a career is an incredible feat.

To ice the cake, Emily was named the meet’s outstanding swimmer.

Katie won her first two state titles, taking the 200 IM and 100 backstroke, and if she’d been in her sister’s shadow just a little bit before Friday,  now the sun beams down equally on both of them.

“They’ve put in the work from young age,” Salisbury coach Sallie Pittman said. “Swimming is a tough sport, but they decided early on to dedicate themselves to that one sport. They put in the work. Now they’re great at it.”

The Hornets finished fourth in the team scoring. Their 38 points put them behind Carrboro (97), Elkin (68) and Community School of Davidson (45), but ahead of a host of strong public and charter school programs.

Nine points are received for winning an individual event, so the Knorrs racked up 36 of those 38 points with their victories.

Salisbury qualified two relay teams for the state meet. In the 200 medley relay, the Hornets were about 11 seconds off Elkin’s pace, but the Knorrs, Maggie Alexander and Sage Huffman placed eighth for the Hornets’ other two points.

In the 400 free relay, the Hornets just missed. Eight teams score. They were ninth, about 19 seconds off Carrboro’s winning pace and three seconds behind eighth-place Christ the King. The Knorrs swam with Huffman and Meredith Burton.

“I was really pleased with our relays,” Pittman said. “Our best times of the year.”

In this COVID year, there was no Rowan County Meet, but Salisbury won the Central Carolina Conference championship and placed a close fourth in the 1A/2A Central Regional. Both Knorrs won a pair of regional championships.

“I was a little surprised that we were able to qualify for the state in two relays,” Katie said. “But that was great because it meant we could swim with our teammates one more time. And we did well in the relays.”

With the number of qualifiers reduced by COVID limitations,  where were no preliminaries Friday, just timed finals that began at 2 p.m.

“In that respect, it probably was a little easier than it usually is,” Pittman said. “It’s always a very long day.”

The first event was the 200 medley relay, which served as a warmup for the Knorrs, especially Emily, who finished off the relay. She’s been working through some back tightness.

Emily’s 200 free was the first individual event for the Knorrs. She was the defending champ, but came in seeded second based on this season’s times.

She won by less than a second over Bradford Prep’s Summer Eaker.

‘When she was a sophomore she got out-touched in the state meet by two taller girls and finished third,” Pittman said. “So she always tries hard to make sure it didn’t come down to a touch. She took it to them.”

“I just really wanted to win,” Emily said. “Getting a record in that event was a nice surprise. I wasn’t expecting it.”

“Katie has been the hard-luck girl in the past,” Pittman said. “But not today.”

Emily wasn’t nervous at all about the outcome in the 500.

“I’ve trained more this year than I ever have and I knew from experience that I should win the 500,” she said. “I just had to go do it.”

“Last year Emily won two events, but Community School of Davidson had a great swimmer who went on to Texas A&M,” Pittman said. “That girl not only won two events, she set records, and she got the most outstanding swimmer award. I told Emily that if she wanted to be recognized as the outstanding swimmer, she needed to set a few records. When she opened up a big lead in the 500, she didn’t relax. I believe the record provided motivation for her and that kept her pushing.”

Then Katie went out and won the 100 backstroke for her second victory. She swam 57.96 and won by exactly two seconds. She was fourth in that event as a junior.

“I struggled some last year, struggled to get into it mentally,” Katie said. “But I’ve been excited this year about getting back in the pool. I knew I was capable of winning today, but it’s a great feeling when you go out and do it. Especially to win two.”

As excited as Katie was, Emily was equally enthusiastic for her.

“For both of us to win two, I couldn’t be happier,” Emily said.

The Knorrs finished their day with their teammates in the 400 free. They’d already made their statement, but they still didn’t slack up.  They always compete.

The Knorr family has supplied the Hornets with outstanding swimmers for many years, but this was the last time.

“There are no more Knorrs,” Pittman said sadly. “It’s going to be different.”

But what a way to go out.

On top and happy.

“For Katie to win her first two state championships and for Emily to not only defend two titles, but to set records and get the top award, what a wonderful day for Salisbury swimming,” Pittman said. “We had our best times in every event. What a fun way to end a not-so-normal swim season.”