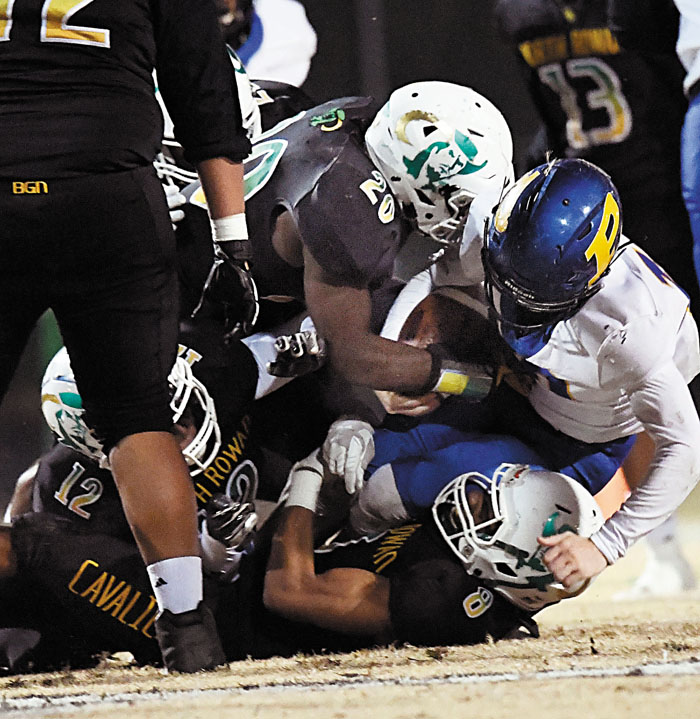 First in a series of reports on local high schools …

SPENCER —  New North Rowan head coach Nygel Pearson has had to wait six months longer than he expected to coach his first official football game, but he’s ready for the challenge of following Ben Hampton.

Football is closer to reality for NCHSAA schools after weeks and months of prayers, hope, angst and preparation.

North won’t have Malcolm Wilson to carry the ball for the first time in years, but it does have returning quarterback Kyree Sims, who threw 10 touchdown passes and ran for four scores, to trigger the offense.

Defensively and on special teams, Zay Davis has been one of the county’s best for a while. He had six interceptions and two defensive TDs as a junior. He’s a threat to go all the way every time he touches it.

“Zay is going to play an outside linebacker/strong safety role for us,” Pearson said. “He’s a football player. We’re also going to find ways to get him touches on offense. We need the ball in his hands as much as possible.”

Pearson expects Davis and his defensive mates to shoulder most of the load in the early going.

Most of the offensive skill players have at least another week of basketball, so they haven’t had as many football reps as some of the defensive vets.

“Our defense is ahead of our offense right now, and we’ll count on those guys to help us through the rough spots in the early part of the schedule and help get us over the hump while our offense finds a rhythm,” Pearson said. “Our strongest area right now is the back end of our defense. That’s where we’ve got a number of guys who have played a lot of varsity football. We’ve got talented guys on offense, but they’re mostly young guys.”

Pearson is a believer in odd-front defense. The Cavaliers will usually show a three-man front with a lot of linebackers flying around. They have a lot of guys with linebacker bodies.

“We want to put a lot of pressure on quarterbacks, and if we can do that, those experienced guys in the back will make some plays for us,” Pearson said.

The defensive crew will count on Jaharion Graham (three interceptions in 2019), Jyrik Scott and Tyshaun Pratt, all of whom have serious experience in the secondary. Like Davis, Graham has been a starter since his freshman year.

Tsion Delaney is a hard-nosed playmaker at linebacker. Bryson Crisco is a solid linebacker and a dependable tackler. Zay Davis’ younger brother, Khalil, will be a sophomore linebacker to watch.

Defensive end Chauncey Morris and interior lineman Tyquan Young will be expected to bring pressure up front and create havoc.

“We’ve got about 45 kids that we’re counting on,” Pearson said. “Everyone we have is cross-training on offense and defense. We definitely will be playing some kids both ways. My philosophy is to get the best 11 out there.”

KJ Krider is expected to be a starter on both the offensive and defensive lines. Another experienced linemen is Dadrain Robbins.

As far as offensive scheme, Pearson is a former offensive lineman, so he believes offense starts with the running game.

“I believe you run the ball so that you can throw it,” Pearson said.

Who’s going to run it with Wilson no longer in green and gold?

Well, both of the Davis brothers. The other big hope is junior Ronnie Fennell, who got some carries last season. Tyshon Sifford, who was expected to be the No. 1 running back, back in the summer, transferred to Robinson High in Concord.

North will employ a spread offense, with mostly one-back formations, and they’ll go with five receivers and an empty backfield, at times.

Sims, who has been part of the basketball team, will have towering targets in the passing game, once those receivers report from hoops. The basketball players have been able to do only limited football work this winter, walk-through and chalkboard stuff.

Senior Kendrell Goodes is 6-foot-4 and can really jump. He had 13 catches in the fall of 2019. He can be used as a wideout or tight end.

Two sophomore receivers are among the school’s most touted athletes — Amari McArthur and Kemon O’Kelly.

“Amari is very exciting,” Pearson said. “He’s a young kid with a big body. He can run and jump with the best and is probably as talented as any athlete in our school. He has no idea yet just how talented he is.”

With those long receivers, Pearson will look for favorable matchups with small defensive backs. In the Yadkin Valley Conference, North is going to have a major advantage most weeks.

This will be North’s last season in the 1A YYC, a far-flung league that includes distant outposts such as Chatham Central and North Moore. Two league members (Gray Stone and Uwharrie Charter) don’t field football teams, and the league generally hasn’t been a positive for North as far as travel issues or gates. It’s not like a lot of people have been showing up to watch North’s YVC opponents, with the exception of North Stanly and Albemarle.

With fans in the stands for this COVID winter season currently limited to 100, gate receipts aren’t going to be a plus for anyone.

But there’s a lot of hope at North regarding the future.

In the fall of 2021, North is set to be part of a revamped 1A/2A league where it will be reunited with old foes Salisbury, Lexington and Thomasville.

Every fan and ex-athlete has a story about a North game with those three schools, and those rivalries can certainly be rekindled and the bleachers can be filled again.

That’s something to look forward to, and Pearson said the Cavaliers already have scheduled West Rowan, East Rowan and South Rowan as non-conference opponents for the fall of 2021.

North has an upcoming scrimmage with 4A Davie County. That will be challenging, but Pearson is enthusiastic.

“We’ve got some pretty tough kids,” he said.

North has only six games scheduled, with April 2 still open. The Cavaliers haven’t given up on filling that void.

“You never know,” Pearson said. “These are different times. If a team is in quarantine and their opponent needs someone to play, we could be that team.”