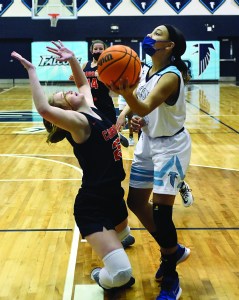 MOUNT ULLA —  A Senior Night with no seniors.

West was shaky, at times, on Friday but pulled out an exciting 56-54 North Piedmont Conference win against Statesville.

West was down 44-39 going to the fourth quarter, but finished strong.

“We played like a bunch of young kids for a while,” West coach Ashley Poole said. “We got down 14 and had to claw our way back into it. But we kept plugging away.”

DeDe Cuthbertson had her best game of the season with 10 points. Mya Edwards scored nine, while Emma Clarke had seven.

“They’re athletic,” Poole said. “We had two tough games with them.”

West finished second in the NPC behind Carson, but only one NPC team is guaranteed a playoff spot with this season’s reduced field.