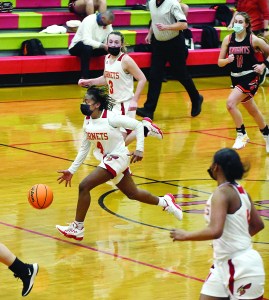 The Hornets shut out the Raiders in the first quarter and led 36-9 at halftime.

Salisbury is ranked No. 1 in 2A by MaxPreps and is No. 11 for all classifications.

Kyla Bryant had 15 of her 20 points in the first half to lead the Hornets (11-1, 9-0). Bryant reached 20 points for the fourth time and has been in double figures every game.

Rachel McCullough got nine of her 11 points in the second quarter.

Salisbury was able to rest post player Jamecia Huntley, who has been limited by shin splints.

Only four players scored for South, with Carlie Moore netting seven and Mackenzie Chabala getting six.

The CCC is using a tournament format like the one the league used for volleyball.

Top-seeded Salisbury will play at home against No. 4 Oak Grove on Monday in a semifinal.

Ninth-seeded South Rowan will play vs. 10th-seeded East Davidson at home on Monday.